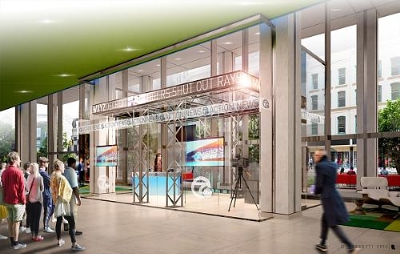 The street-side studio in the Chase Tower will be the new home of the Scripps ABC affiliate’s 7 Action News at Noon.

Sixty-six years after ABC affiliate WXYZ Detroit (DMA 11) flickered to life on TV sets across Southeast Michigan from its first Woodward Avenue studio in Detroit, the station is expanding its operations with a new, highly visible studio in the heart of downtown. The glass-enclosed, outward-facing studio will be located inside the ground-floor lobby of Chase Tower, 611 Woodward Ave.

When the new WXYZ street-side studio opens this fall, with views of Woodward Avenue and Campus Martius Park, it will be the home of 7 Action News at Noon with Joanne Purtan. The studio will also quickly become a familiar sight in other WXYZ and WMYD programming, as well as on both stations’ digital platforms.

“This is a historic step in our mission to be the best station in Detroit and the best station for Detroit,” said WXYZ VP-GM Ed Fernandez. “This studio will give 7 Action News viewers an exciting front-row seat to the city’s incredible rebirth and allow us to connect in meaningful new ways with people making a difference and guiding Detroit’s transformation.”

WXYZ’s first TV broadcast took place on Oct. 9, 1948, from its studios inside the Maccabees Building located in Midtown Detroit. The Scripps station’s main studios will remain in Southfield, Mich.

“WXYZ has always led the way in metro Detroit and the TV industry,” said WXYZ Station Manager Mike Murri. “This studio is an exciting new chapter in our growing news programming. Located in the epicenter of downtown, this studio will give us tremendous access to the people that live and work in the city and to the region’s newsmakers,” he said.

“With the station’s increased visibility in the heart of Detroit and live daily broadcasts, WXYZ’s new studio will be one of the most interesting and lively street-level additions to downtown,” said Jim Ketai, co-founder and managing partner of Bedrock Real Estate Services, which acquired Chase Tower in April 2011

The design of the new WXYZ downtown studio will honor the mid-century modern architecture of the Chase Tower. The building was designed by the Detroit-based architecture firm, Albert Kahn Associates, and opened in 1959. The 524,000 square foot, 14-story building occupies a full city block at the foot of Campus Martius Park.