Hearst Television moves her from its KETV Omaha, Neb., to succeed the retiring Elliott Troshinsky as head of its NBC-MNT duopoly in California’s capital city.
By Mark K. Miller | May 13, 2020 | 3:31 p.m. ET. 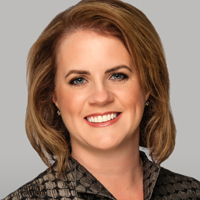 The move returns her to northern California; earlier in her career she worked at TV stations in the Chico-Redding and Eureka markets. Her appointment is effective July 1.

Roblin succeeds Elliott Troshinsky, who led the Sacramento stations for two decades and who will retire from Hearst Television at the end of June.

“Ariel truly embraces the important responsibility of a television station in a local community. Her commitment to local journalism and tireless community engagement have helped KETV become one of the nation’s leading affiliates,” Hearst Television President Jordan Wertlieb said. “Ariel’s proven success in leveraging a station’s legacy in a contemporary media landscape makes her uniquely qualified to succeed Elliott and lead our best in class team at KCRA and KQCA.”

During Roblin’s leadership, KETV  earned National Edward R. Murrow Awards, including an award for Overall Excellence, and several Regional Emmy Awards. The station also garnered recognition for its role in helping revitalize Omaha’s downtown region by refurbishing and relocating its studios to the site of the abandoned historic landmark Burlington Train Station. The project earned KETV and the new facility’s architect a number of awards including a 2016 Nebraska Preservation Award; an award of excellence in interior architecture from the American Association of Architects–Central States; and a John H. Conant Award from the Great Plains Chapter of the National Railway Historical Society.

She began her television career in Miami as a program director at WAMI, after which she went on to sales positions at WRGT-WKEF Dayton, Ohio; and KGMB Honolulu, before moving to KRCR-KAEF.

Roblin holds bachelor’s degrees in communications and fine arts from the University of Miami.