Local TV is facing a brutal quarter ahead, but the industry has shown creativity and endurance when dealing with past downturns. There’s every reason to believe it will do so again, and its first efforts are already visible.
By John Altenbern | May 6, 2020 | 5:30 a.m. ET. 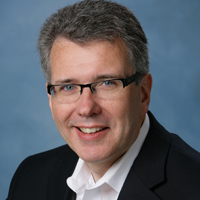 During Warren Buffett’s virtual shareholder meeting on May 2, he called attention to a line he has used before: “Don’t bet against America.” I’ll go a step further: Don’t bet against local television.

In some corners of our business the doomsayers make it sound like local TV is on a ventilator.  Advertising is gone and will never return. Business will never be as good. The glory days are over.  During the darkness of a pandemic, it’s hard to see the future, but there is light at the end of the tunnel and it’s not just a train coming to flatten us.

This quarter will be brutal for local television. Revenue has evaporated and COVID-19-related expenses are up. Sports are gone and original programming is thin. While the industry hasn’t been in this exact spot before, the response to past adversity provides hope.

I remember a 10 p.m. newscast in Phoenix at the height of the 2009 recession, and the first break had a single paid spot: an ad from a local mom and pop restaurant for a $5 burrito lunch special. The general manager told me he was lucky to have it — other advertisers had disappeared. Back then it took months for business to improve. This time it will take even longer.

Take a good look around. In the past days you’ve seen friends and neighbors eager to re-engage with public life. Wearing masks, they take family walks, plant flower beds and grab Amazon orders off their front porches. DoorDash cars cruise through neighborhoods, bringing groceries and restaurant deliveries. Life has changed, but it hasn’t stopped. Neither has business.

Today as I watch local newscasts across the country, there are green sprouts of new life. One station group highlights local shop owners who record their own messages on iPhones telling customers to stop by. Another closes its evening newscasts with a “moment of Zen” showing calming video sponsored by a local spa. In a small market, a community bank and an auto body shop underwrite salutes to graduating high school students. It’s a trickle, not a flood, but none of it would have been on air if not for the imagination of local salespeople.

Local businesses are inventing all kinds of new ways to keep the lights on. Virtual doctor visits, curbside service and daily specials are all bubbling up from adversity. All are in need of marketing.

Stations are responding creatively. Whether it is E.W. Scripps’ “Rebound” campaign, ABC’s Localish initiative or any of a dozen “buy local” efforts on the air across the country, stations answer the bell as they always do. Research shows local television remains the most relevant and valuable media presence in communities large and small across the country, more than print, radio, cable or social media.

Newscast viewing is strong, and over-the-air entertainment is free, unlike cable and most streaming services. When the chips are down, people need and depend on local TV. Ratings prove it.

Recently, the hand-wringing in our industry involved declining audience levels. Now, one of the fastest growing audiences for local television is young adults — those folks who way back in January were lost in their phones and had forever turned their backs on television. Suddenly, consumers are reminded of our relevance. Viewers are finding value in what local TV provides.

That means advertisers will, too. Local television is the single most valuable marketplace available for local businesses. Do we really think that stations won’t be at least as creative in solving their business issues as the corner restaurant?

It will take time and a few ads for $5 burritos. It will require a different mix of messages, new sales techniques and new clients, but advertising will be back. Unlike a lot of digital advertising, local television can provide measurable audiences and return on messages, so it should be among the first places advertisers turn. Just like those spring flowers that were underneath the snow a few weeks ago, business will come back.

Yes, there is real pain right now. But the spirit of invention is alive, meaning business will not forever go to hell in a handbasket. The enduring value of local television and the creative power of the marketers who drive it can overcome this adversity, too. Don’t bet against them.

John Altenbern is president of CJ&N, a media research and consulting firm.

This article is delirious ..The Local and national media business is on its heels ..Not because of Covid 19..but because these companies have lost out to the digital sellers/streaming services ..They have gotten beat and did not react fast enough with creativity in both selling/marketing ideas and as importantly in the ideas of creative content..

Local broadcast TV will survive as long as the FCC does not take away its broadcast spectrum. What all these digital holy rollers fail to understand or acknowledge is that digital advertising is still (and always will be) a subscriber based medium. Broadcast TV has perfect distribution. 50+ channels for free in my market. We don’t stop selling advertising. We change advertisers. NO digital advertising can drive market share growth faster than broadcast TV. Google search is nothing more than the new yellow pages (so what ?) Our pitch against Google search is the exact same as our pitch against the yellow pages. This republican depression is no different than the last two republican depressions. As discretionary income drops, broadcast TV becomes more popular. That is why viewing levels of broadcast TV are at levels not seen in 3o years. What younger ( far more broke) viewers are leaning is that all those most of those binge worthy reruns on their streaming services originated on broadcast TV. I found myself watching a series that originated on the WB. There has only been one challenge facing broadcast TV. That challenge is Wall Street and C-Suite leadership with little or no experience successfully running TV stations. The key term here is successfully. Those leaders are really easy to identify. They are the ones who are constantly talking about changing broadcast TV to some other medium. (Lougee) They promote the popular and think the experienced will provide the training that the inexperienced popular cannot provide simply because they lack experience. Software will never replace Local human talent. I would eat that station alive. My clients are buying access to my experience.