Stations and broadcast networks alike are heavily turning to IP contribution to cover the presidential primaries this year as past contention problems have largely dissipated and cellular networks greatly improved. For some, however, dedicated fiber and satellite trucks will still play a key role.
By Glen Dickson | January 23, 2020 | 10:13 a.m. ET.

As networks and local stations ramp up their coverage of the 2020 presidential race with the first state primaries and caucuses in Iowa, New Hampshire, Nevada and South Carolina next month, there’s a great deal of editorial uncertainty between the impeachment trial of President Donald Trump and a still-cluttered Democratic field further muddled by the late entry of billionaire former New York mayor Michael Bloomberg.

But on the technology side the early votes are already in, and the winner is IP newsgathering by a wide margin.

Cellular bonded systems from vendors like LiveU, TVU Networks and Dejero that can either use wireless capacity from major carriers like Verizon or AT&T or tap into hard-line internet connections first made an impact on how broadcasters handle contribution feeds with the 2012 election. Since then, they have rapidly evolved to become most broadcasters’ first choice for bringing live and recorded content back from the field, supplanting traditional satellite, fiber and microwave technologies.

Contention problems that used to occur with the bonded systems when multiple crews at a site fired up their backpacks have mostly gone away as carriers like Verizon and AT&T have improved their circuits, though engineers say those problems can still pop up occasionally at major events like the political conventions or the presidential inauguration.

Major networks like ABC and CBS as well as many local stations now handle the majority of their contribution feeds using the IP-based bonded cell systems, which is a profound change in the way they do business. For example, 90% of ABC’s contribution feeds today come through IP links, most of that handled by TVU backpack systems, with the remaining 10% split between fiber and satellite.

On the call-letter front, Meredith Local Media Group does about 80% of its daily newsgathering with LiveU bonded systems, with newer trucks that don’t have microwave capability using Ka-band IP satellite systems as backups. Meredith uses the LiveU Matrix system to share content between stations, and its CBS affiliates have dedicated LiveU encoders to feed content to CBS.

The biggest benefit with the shift to IP is for the networks, who for decades scrambled through election cycles to get satellite trucks to campaign stops and secure extra occasional-use satellite capacity to augment existing transponder leases. That satellite capacity became further squeezed with the 2008 presidential election, when networks shifted to high-definition feeds that required up to four times the bandwidth of standard definition (a problem mitigated by the move from MPEG-2 to MPEG-4 compression).

Since then, IP contribution has taken off as wireless networks upgraded and overall broadband connectivity improved. Fiber links have become more widespread and prices have dropped, making satellite often the third choice for contribution feeds behind bonded cell and fiber. Besides point-to-point links, fiber for dedicated internet access is also readily available in many markets.

“The industry has changed quite a bit,” says Rick Jefferson, VP of news operations at CBS News. “Today, we have very little reliance on satellite transmission technologies, though we do deploy satellite trucks to major events as a backup.”

Jefferson says that CBS has “a heavy reliance on IP,” and uses LiveU systems for “the overwhelming majority of our domestic feeds and live shots.”

The LiveU systems allow CBS to easily employ an “at-home” production methodology where live camera feeds from the field are brought directly back to the CBS Broadcast Center and switching is handled there, removing the need for a mobile production truck onsite.

CBS News generally has multicamera shoots with four cameras, and will send all four paths back over the IP pipe. Latency over the cellular network is not an issue in that setup, as all four feeds are coming back at the same time.

With stations in early battleground states like KCCI in Des Moines, Iowa and WMUR in Manchester, N.H., Hearst Television is already gearing up for the 2020 election coverage at its 34 stations in 26 markets. In fact, the station group plans to expand coverage to a national basis with its “Commitment 2020” initiative, under which journalists from Hearst stations will work with teams from the company’s Washington, D.C. bureau to report from neighboring and regional states as well as their home markets. 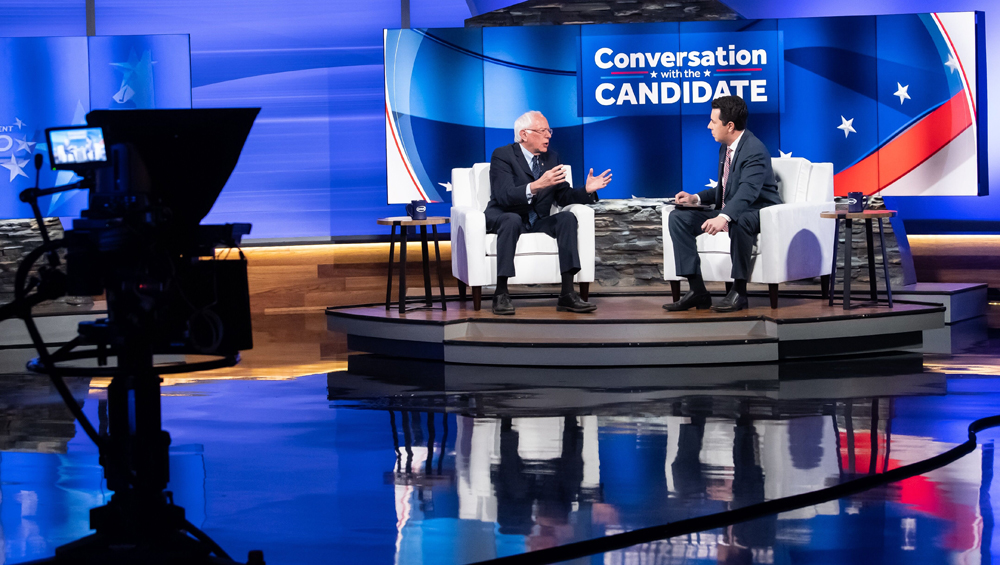 That includes bonded cell, through both wireless and direct Ethernet connections; Ku-band satellite; 2-gigahertz and 7-gig ENG links; and point-to-point fiber in some locations. Like CBS, Hearst also uses bonded cell technology to backhaul multiple camera feeds over a single IP path. It relies on TVU Networks’ RPS (Remote Production System) to bring back four camera paths and perform live switching at the station (the TVU system can handle up to six feeds).

Hadl says the percentage of feeds that are delivered via IP varies by market, with some stations still making heavy use of ENG.

“Our day-to-day news is all bonded cell, as it allows us to be in more places quickly,” Hadl says, “but the stations that have an existing infrastructure for ENG that is still sound, still use it.”

Hearst is unique in that it still has a dedicated Ku-band transponder that it uses to cover breaking news across the group. It also has dual-path Ku-band trucks in several markets that are capable of transmitting two live signals in a single Ku-band uplink. It plans to make good use of them during the 2020 presidential race. The flexibility satellite provides is a great benefit, Hadl says.

“Sometimes cellular doesn’t work, and then SNG has proven to be our ace in the hole,” he says.

Rob Galker, VP of satellite operations for Fox News Channel, recalls a story about four years ago where multiple news crews showed up to cover a press conference and everyone had a bonded cell backpack except for one station that sent a Ku-band truck. The only feed that wound up working was the satellite truck, as once everyone fired up their backpacks no one could get a usable signal through IP. But times have changed.

“That’s much better now,” Galker says. “AT&T and Verizon have built out their networks and all of the backpacks can also bond cellular with wired Ethernet. So for a lot of locations we plug the backpacks into a hardline Ethernet connection, and we just grab the cellular on the side if it’s available. That way we’re not putting all of our eggs in one basket.”

Jefferson and Hadl agree, noting that cellular networks have improved greatly since they first began using bonded and that the major carriers now bring in extra transmitters for big events. Hadl says Hearst’s WDSU New Orleans was able to rely solely on TVU bonded systems for its news coverage of the national college football championship game earlier this month with no problems.

FNC has been steadily transitioning to IP contribution. Galker says “well over half” are transmitted using bonded cell or some type of Internet-based transmission for day-to-day newsgathering like single-camera live shots. He notes Fox uses a slew of vendors including LiveU, TVU and Dejero, among others.

But for major events that are multicamera productions, FNC still employs satellite trucks as well as fiber links. It often uses satellite as the primary feed, with capacity leased from Intelsat, and IP as a backup. For coverage of the Iowa caucuses and the New Hampshire primary, FNC will use a combination of fiber, satellite and IP to support various feeds.

“We are still going to have dedicated fiber, and we still will have satellite trucks,” Galker says. “At the end of the day, it’s still important to have our own self-contained transmission path that is under our direct control. We’re not going out over temporary terrestrial links for big events. That’s still the advantage of satellite, that it gives you an uplink in your backyard, and you’re not subject to network congestion or fiber cuts.”

FNC uses MPEG-4 compression for SNG feeds and is able to deliver HD at a bitrate of 7.5 megabits per second (Mbps) in 4.5 megahertz of Ku bandwidth. Galker estimates that with HEVC the network might be able to deliver HD using 30% less satellite bandwidth, and he plans to switch to HEVC when FNC upgrades its encoders. It already uses HEVC with bonded cell transmissions, where it can deliver an HD live shot at about 2 Mbps.

Despite the industry’s big shift to IP, conserving satellite bandwidth remains important, Galker says. It’s an issue that is highlighted by the FCC’s plan to reclaim some of the C-band spectrum for 5G terrestrial applications.

“One of the ironies is that a lot of people think that with everyone migrating to terrestrial IP, there is tons of satellite capacity that is unused,” he says. “That isn’t the case at all. There’s a capacity crunch on the Ku-band side. There isn’t a whole lot of satellite spectrum in general, and now we fear C-band is going to go away.”

For Hearst, sometimes its traditional satellite and microwave trucks prove useful even when it relies on bonded cell for contribution — particularly in cold places like Iowa and New Hampshire in February.

“Sometimes you need the environment of an ENG truck for editing, and a place for people to gather,” Hadl says.