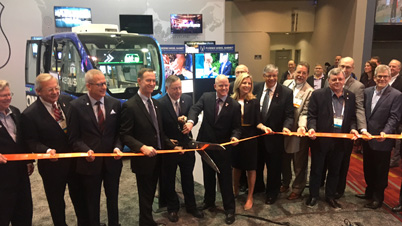 Enthusiasm runs high as the next-generation TV standard has its official ribbon-cutting launch in Las Vegas. In addition to panels, exhibit booths of new gear, NAB Show attendees can take a ride from the Central to South Halls in an autonomous vehicle equipped with ATSC 3.0 sets, receiving an ATSC 3.0 signal sent from an experimental Sinclair transmission facility 15 miles away.

LAS VEGAS — Broadcasters, members of NAB and ATSC and consumer electronics vendors gathered outside the NAB Show floor on Monday morning to officially “cut the ribbon” on the next-generation ATSC 3.0 standard and announce more consumer electronics manufacturers who are supporting a market trial in Phoenix run by the Pearl TV consortium of station groups.

In addition to LG, which was previously announced as a partner in the Phoenix Model Market, Sony and Samsung are also joining the Phoenix trial. Sony will supply ATSC 3.0 TV sets and help develop the electronic program guide (EPG) for the test, while Samsung will share expertise gained from the launch of ATSC 3.0 broadcasts in Korea last year. Antenna manufacturer Channel Master, which is based in Phoenix, will supply a variety of consumer receiver antennas to the project and also lend its expertise in reception measurement.

Mike Bergman, senior director of technology and standards for the Consumer Technology Association, said that CTA is excited to be involved in ATSC 3.0’s development and highlighted its ability to deliver 4K ultra-hi-def video and immersive audio. He said 4K is gaining momentum, as CTA projects that 22 million UHD TV sets will be sold in 2018, the first year UHD sales will surpass traditional HD sets.

Craig Todd, SVP and CTO for Dolby Labs, said that the move to immersive audio with ATSC 3.0 “may be an even bigger step forward” than the move to five-channel surround sound that came with ATSC 1.0.

Show attendees can take a ride from the Central to South Halls in an autonomous vehicle equipped with 3.0 sets, receiving a 3.0 signal sent from an experimental Sinclair Broadcast Group transmission facility some 15 miles away. A similar autonomous vehicle was the centerpiece of the ATSC 3.0 exhibit in the Grand Hall of the Las Vegas Convention Center, where the ribbon-cuttting took place.

Sinclair is behind a trial of 3.0 with Single Frequency Network (SFN) technology in Dallas, and Sinclair VP of advanced technology Mark Aitken noted the launch of 3.0 broadcasts in there by Dish Network using its 700 MHz spectrum. He said that 3.0 has finally delivered the mobile capability that Sinclair has long sought, dating back to its early campaign in the late 90s to scrap the 8-VSB ATSC 1.0 standard in favor of the OFDM modulation being used for digital TV in Europe and elsewhere.

“Nineteen years ago we launched OFDM, and it took us a while to get here,” said Aitken. “We now have a standard today capable of doing everything we’ve wanted to do for so long.”

Overall, over 40 companies are showing support for 3.0 here at NAB, where there is also an extensive demonstration of the standard in the NAB Futures Park.

What will it cost to convert today’s HDTVs? And yes will there be Analogue Converter boxes also?

It’s spelled analog in American English, which is what we use on this site.

They “money grab” was the government taking spectrum from OTA television broadcasters and selling it to wireless operators.

Remember ….You can upgrade all the distribution technology you want but content is King and how are you going to fix that????

So how long before broadcasters are forced to adopt ATSC 3.0? Sure it’s optional now. But you gotta know that eventually, they’re going to force everyone to upgrade. Some of us small market stations have barely finished upgrading to full HD!

I would expect the same amount of time they allow for the Repack.