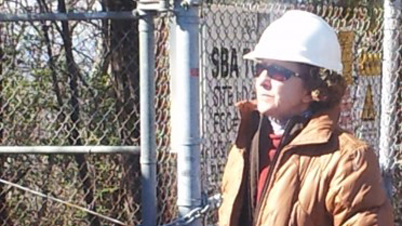 Never mind that Cindy Hutter Cavell spent six weeks in the Himalayas rigging the broadcast of a Mt. Everest climb. Or that she trudged through a Seoul hotel koi pond, rolling out cables along the way, so the reporter Sam Donaldson could have the shot he wanted.

There are purists out there who would still insist that Hutter Cavell — a woman with 30-plus years experience in broadcasting technology — is still not a bona fide engineer, primarily because she doesn’t hold an academic seal of approval.

Even Hutter Cavell’s dad, a civil engineer, said that while he’d support her undergrad decision to study journalism instead of engineering (“It bored the bejesus out of me,” she says), it came with a caveat: she could not refer to herself as a the real deal.

“I don’t know what it is about engineers, but if you’re not a PE (that’s industry lingo for credentialed professional engineer), you’re not a real engineer,” she says.

Yet whether Hutter Cavell, who is the recipient of this year’s TVNewsCheck fifth annual Women in Technology Leadership Award, does or doesn’t qualify as an authentic engineer has had no bearing on her success in the field.

The recipient of three Emmy Awards for Technical Innovation and the 2007 Female Broadcast Engineer of the Year Award from the Alliance for Women in Media and the Society of Broadcast Engineers, Hutter Cavell is known for her expertise in television station workflow, facility planning, multi-stream and multicasting design and TV due diligence.

“She is a monster in the best sense of the word,” says OTA Broadcasting COO Carol LaFever, who hired Hutter Cavell as a consultant roughly two years ago. LaFever says Hutter Cavell proved to be so “invaluable” during that time that Hutter Cavell now serves as the group’s director of engineering as part of her consulting deal. “She knows it all,” LaFever says.

Hutter Cavell says she first developed a “love of tinkering” while working at her suburban Chicago high school radio station. Although she was technically the station’s classical music announcer, Hutter Cavell love to watch the physics teacher who doubled as the station engineer fiddle with “the little tiny FM transmitter.

“I found it fascinating,” she says.

Although Hutter Cavell pursued journalism at the University of Kansas, she says she “always stayed close to the equipment side.” Her first jobs included working at small market stations throughout the Southeast, at a time when big tech challenges included transitioning from film to videotape.

In 1979, Hutter Cavell went to ABC News, where she spent what she calls “the best 15 years of my career,” during which she rose from technician to director of operations for the network’s Washington bureau.

“I learned pretty much everything that the rest of my career was launched out of,” she says.

At that time, higher-ups were “extremely willing to teach the new kids the ropes. It didn’t matter who you were,” Hutter Cavell says.

Her mentors included industry leaders, like the late, longtime ABC engineering exec Julius Barnathan, who, like Hutter Cavell, was not an academically trained engineer. He had a degree in statistics.

“So many of us just learned by doing it.”

During that time, Hutter Cavell broadcast from the White House and presidential trips. She spent more than three months in Saudi Arabia setting up broadcasts during Desert Storm, and orchestrated coverage of the Bush-Gorbachev meeting in Malta (the weather was so bad there that the crew tied a cinderblock around Hutter Cavell’s waist while she was working on a roof so that she wouldn’t blow off).

Hutter Cavell next took a job as station chief engineer for Argyle Television (before it merged with Hearst), which involved overhauling TV stations around the country, which Hutter Cavell calls “a blast in its own right.”

After that, she held top engineering jobs at Fox Sports Networks, the Atlanta-based Digital Systems Technologies and Sprint Nextel before joining Cavell, Mertz & Associates, owned by her husband, Gary. Her title is senior engineer and practice manager.

Having experienced enormous growth and change in the industry, Hutter Cavell says she sees plenty more on the horizon.

She envisions next-gen broadcast engineers as a somewhat different breed of professionals — people who are software developers and networking experts.

Yet she firmly believes in offering up her experience, to help young engineers learn the way she did. “What people my age have to do with new folks coming in is teach them what we know before we finally retire so that can be carried forward,” she says.

For Hutter Cavell, that’s a lot of stuff — including adhering to the idea of doing what you love.

“I’ve never not had fun doing this.”

After studying EE for four years, I eventually changed to majoring in and graduating with a BA in Radio-TV to learn more about the industry. While I obtained a First Phone at age 19, I never did earn an actual EE degree, nor am I a card carrying RPE. But in every other respect I consider myself an engineer. Cindy Hutter Cavell, ! CAN RELATE. Congratulations!

Cindy Hutter Cavell does not bash the Industry she works in either.

I worked with Cindy on several downlink projects while she was at stations on Buffalo, St. Louis, and Cincinnati. I would never have dreamed that she was not a degreed engineer. She was not only professional, and courteous, but also extremely knowledgeable. I always appreciated how wonderful she was to work with, and how easy she made my job. I couldn’t be happier for her.