Back to TVNewsCheck Home Print this page
TVN'S EXECUTIVE OUTLOOK 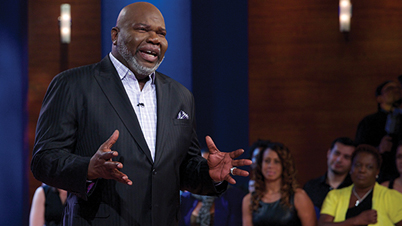 A determined cadre of station groups remains intent on replacing pricey Hollywood syndication shows with programming of its own. Among the upcoming do-it-yourself offerings is a talk show from Tegna Media hosted by T.D. Jakes set to debut this fall.

For a TV station group, it’s the ultimate do-it-yourself project: Find a great talk-show personality, produce a talk show around him or her, test it, clear it on your own stations and then try to distribute it nationally without a big distribution company.

That’s what Tegna Media is doing with T.D. Jakes, a talk show featuring the Dallas-based minister and inspirational speaker. Last month, Tegna declared the show a “go,” even though it was cleared only on Tegna stations reaching 22% of the nation’s TV homes.

“It is definitely a part of our strategy moving forward,” says Bob Sullivan, Tegna SVP of programming, who joined the company last March.

Jakes is also the best example yet of the determination of several major TV station groups to produce their own programming, despite Hollywood naysayers and a checkered history with such home-grown shows. They say they are simply seeking greater control over their own business fortunes.

Translation: They feel they can make shows cheaper using their own personnel and facilities, accept lower ratings and, at the same time, enjoy wider profit margins than they’re achieving with nationally syndicated shows whose ratings don’t justify their license fees or the ad inventory they have to give away in barter deals.

“Consolidation has given these guys scale that they didn’t have before,” says syndication vet Scott Carlin who is working with Tegna on distributing Jakes beyond the Tegna stations. “They now have the scale and the wherewithal to legitimately be in control of the production and the distribution of their own content. This wasn’t possible five or 10 years ago.”

Despite the uncertainties stemming from years of experimentation with different forms of home-grown, do-it-yourself programming, at least six groups have positioned themselves to exploit original programming opportunities — Tegna, Scripps, Raycom, Media General, Sinclair and Tribune.

After Sullivan jumped to Tegna, Scripps hired Cater Lee to succeed him and promoted Mark Binda from program and research director at Scripps’ WTVF Nashville to senior director of programming, reporting to Lee.

In October 2015, Sinclair promoted its COO of original programming, Arthur Hasson, to COO of all of Sinclair’s programming efforts, putting him in position to spearhead the company’s push into originals.

Last summer, Media General hired a new programming head, Tony Optican, to expand the company’s move into original content, according to the company. However, with Media General in the throes of a possible takeover by Nexstar, it’s anybody’s guess whether Optican will have the opportunity to follow through with his planning.

At Raycom, VP of Programming Ken Reiner says the group has “current development across all of our stations. It is a growing opportunity we see in our group, and the industry is moving in that direction with us.”

The station group with the longest history in do-it-yourself programming is Tribune Broadcasting, due mainly to a singular advantage of having stations in the top markets, including the Big 3: New York, Los Angeles and Chicago.

Tribune’s current programs include The Bill Cunningham Show, a conflict-talk show that launched in 2011 and now airs on weekday afternoons on CW affiliates.

But even with a leg up in the nation’s top three markets, not every Tribune show succeeds. Such was the case with the return of Arsenio Hall to latenight in 2013. The new Arsenio Hall Show — produced and distributed in partnership with CBS Domestic Distribution — lasted just one season.

Nowadays, though, Sean Compton, Tribune’s president of strategic programming and acquisitions, says the company is “in a pretty good place…. We are looking at some projects for maybe ’16 or ’17, but we don’t have a lot of holes to fill.”

It’s Hard To Grow Your Own

Whether T.D. Jakes emerges as some sort of bellwether for successful station-group program development won’t become evident for quite some time. What is known, however, is that the history of station groups’ do-it-yourself efforts at creating their own shows is checkered.

In perhaps the most famous DIY effort, Scripps dropped Wheel of Fortune and Jeopardy from its stations in 2012 in favor of two shows it developed itself — The List and Let’s Ask America. Let’s Ask America, a game show that tested ordinary people’s knowledge of the U.S., was canceled last spring. And The List airs on just 15 Scripps stations. Scripps replaced Let’s Ask America with a variety of programming, including Hollywood staples like Access Hollywood, The Insider and Inside Edition.

Meredith Broadcasting created a show based on one of its company’s magazines, Better Homes & Gardens — The Better Show — that aired on 13 of the company’s stations plus some owned by others. The show lasted seven ho-hum seasons before it was put to rest last spring.

When Meredith announced its merger agreement with Media General last fall, executives talked about developing new shows based on the magazines. Now that it appears the merger is off, the programming ventures may be, too.

In 2011, three groups — E.W. Scripps, Raycom and Cox Media — got together to co-produce Right This Minute, a viral-video strip, and launch it on their owned stations. With 87% coverage of the country today, it appears to be a winner among a pack of underperformers.

T.D. Jakes has been trying to break into syndication for years. A 2009 attempt — with Phil McGraw, son Jay and CBS Television Distribution — never came to fruition. More recently, national distributor Debmar-Mercury withdrew from Tegna’s Jakes project after the syndicator concluded there would be no opportunity for national clearances for Jakes and, hence, no national barter.

Tegna believes it can demonstrate the appeal of the show on its own stations and slowly roll it out to others. “Not every program has to have a first-year national launch to be successful,” says Tegna’s Sullivan.

And not every original has to be national, station programing execs say. The economics of some shows are such that they can make a go of it on the originating station group alone, they claim. If other groups or stations come aboard, that’s “icing on the cake,” says Sullivan.

In addition to Jakes, Tegna has been experimenting with a variety of shows or show formats that may or may not reach beyond the Tegna stations. They include Great Day Washington, a one-hour morning show on WUSA; Fix This, a weekly home improvement show tested for 16 weeks last fall on KUSA Denver; and Breaking the News (working title), being developed at KARE Minneapolis-St. Paul.

Tegna has been tapping into its own employees for TV show ideas. Last spring, the company put out a call for concepts and got around 80 ideas that were then whittled down to the 10 most plausible, Sullivan says.

Teams are now producing pilots or sizzle reels around the concepts. “We will look … to see if any of them have viability for local launch incubation in the coming year,” he says.

Media General’s Optican agrees that the stations are fertile ground. “When you think about it, I have a development pool of 71 stations in 48 markets, and these people are doing unbelievable work, and they know their markets better than anyone. We have an incredible production infrastructure all over the country.”

The station group programmers are aware that their development activities have the potential to pit them against traditional syndicators with whom they continue to do business. “I hear from some of [the syndicators] that they are a little bit [worried],” says Lee. “We’re certainly in their wheelhouse.”

Syndication companies don’t like seeing some of their biggest customers continuing to work at the idea of producing and syndicating their own shows and gobbling up the limited real estate.

They are eager to point out that the only thing to come out of the station groups’ efforts thus far have been mostly local and group-wide shows that score far lower ratings than the shows they could provide. “It’s not as easy as they think,” says one syndication executive who spoke on condition of anonymity.

None of the station group programming chiefs think it is easy, and none believe their efforts will replace nationally syndicated shows anytime in the near future.

“We will always be in business with them,” says Scripps’ Lee. “They provide a lot of programs that are very successful on our stations, so we will always work with the syndicators when the content is right and the price is right.”

Says Media General’s Optican: “I love working with all the big syndicators because they come up with great programming. They have a long track record and they do incredible stuff.

“I’m just trying to figure out how I can take advantage of the assets that I have, when there are openings and opportunities [on our stations’ schedules]. I think it’s a real mix of stuff you acquire and stuff that you come up with on your own.”

This story originally appeared in TVNewsCheck’s Executive Outlook, a print publication devoted to the future of broadcasting. Subscribe here.

Consolidation has given these guys scale that they didn’t have before,”
What I want to see is how many people will lose jobs because the tv groups are taking over program production and distribution.

Say what? How many crap programs have stations historically been strong armed to protect syndicated franchises?

The same station groups that crank out marginal local newscasts want to be in the programming business? Wow…