By most accounts, transmitter manufacturers and suppliers of antennas and RF components are doing a good job so far of keeping up with the rapid spike in demand caused by the repack. But weather problems are causing major problems for tower crews and delaying a growing number of projects. And repack insiders fear a more significant backup this summer and fall.
By Glen Dickson | March 14, 2019 | 12:04 p.m. ET. 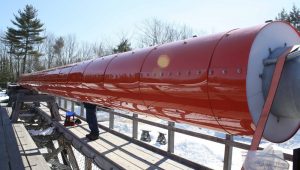 The long, cold winter is leading to a short, hot summer for broadcasters, manufacturers and tower workers involved in the RF repack as they race to move 987 full-power TV stations to new channels in 10 phases by July 2020 and free up the spectrum auctioned off to wireless operators.

Phase 1 wrapped up in late November with 143 stations moving without much incident. (That total includes a number of additional stations that had received incentive payments from T-Mobile to move early in what was deemed “Phase Zero.”)

But bad weather this winter has been causing problems for tower crews and delaying projects in Phase 2, which involves around 114 stations and is due for completion April 12. And repack insiders fear a more significant backup could occur this summer in the middle phases, when the number of stations increases and testing windows compress.

Besides the overall volume of stations, many of the channels in the middle phases have interference dependencies, meaning that if a Phase 3 station is late in moving then a station in Phase 4 also can’t move.

That contrasts with Phase 1, where there were no interference dependencies and a station facing delays could simply be moved by the FCC to a later phase, says Dennis Wallace, managing partner of RF consulting firm Meintel, Sgrignoli & Wallace, LLC.

Some bottlenecks may be overcome by the FCC granting stations STAs to operate with lower power, Wallace says. “But at some point, they reach a scenario where a station can’t transition, and operating with an interim facility is not an option. 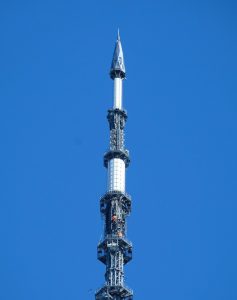 Antennas on top of One World Trade Center. (RFS photo)

“[The FCC is] going to have to give them more time. That creates a ripple effect, then the whole thing gets pushed. I think you’ll see that sometime this summer. It’s just the question of who’s the station who will be the poster child? I have no idea who, but there will be one, at least.”

Vendors of transmitters, antennas and other RF components appear to be keeping up with the big spike in demand caused by the repack. What’s creating the drag is the shortage of tower crews and bad weather that limits how much work they can do.

“This winter has been difficult, to say the least,” agrees Alex Perchevitch, president of Jampro Antennas. “People are looking around for crews, and when they’ve found them, the weather has not been very accommodating.”

Due to the cyclical nature of the RF industry — where investment is often tied to changes in government spectrum policy — the available workforce is rather small.

Stainless, which is the prime tower contractor for Sinclair Broadcast Group and several other large groups, currently has five crews and is bringing in experienced workers from Europe to get up to eight crews by this summer.

But Stainless can’t do anything about the weather, says Business Development Manager Don Doty.

Stainless normally expects to lose 20% of its work days in a year due to weather issues, including rain, snow, ice and high winds, Doty says. But through the winter of 2018-19, crews have lost roughly double that, or 40%, on a national basis, Doty says. In some areas, the percentage has been much higher, he adds. Ice storms have literally frozen work in Indiana, Illinois and Ohio.

“All of the top-tier tower contractors are being impacted; we’re all having to deal with this,” says Doty. “It’s beyond anybody’s forecast. In some places, we’re only working two days out of the week for weeks and months at a time.”

The weather has put Stainless behind before the really busy part of the repack even gets started, Doty says.

“Our projects are not like other projects. Our equipment takes days to set up and take down. And it’s not like we can leave a project and come back when the weather breaks; we have to finish a job before we can go to the next one.”

“In Phases 4, 5 and 6 there is not much wiggle room,” he says. “We wanted to go in ahead of the curve; we wanted some flexibility. Now we’re being pressed.”

Sinclair has a little more than 100 stations involved in the repack. VP of Engineering Harvey Arnold says while the repack is going well overall with great support from vendors and consulting engineers, weather delays have already had a significant impact. He predicts “serious backups” in Phases 3 and 4 because of tower issues. “It’s a heck of a lot of work.”

But he says that weather has been plaguing many Phase 2 projects, and fears further problems this summer in Phases 4 through 6.

“I think that’s when it begins to fall apart, between Aug. 2 and Oct. 18,” Martin says. “In that period, you either go on the air or you go dark. That’s what I envision as the primary bottleneck.”

Eddy Vanderkerken, director of broadcast sales at antenna maker Radio Frequency Systems, agrees that the work will get tougher as the middle phases heat up this summer and early fall. 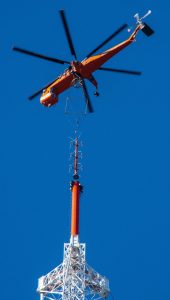 A helicopter places a Dielectric TDM antenna on top of a TUM APT array in Boston. (Dielectric photo)

“The time is very, very narrow,” he notes. “Phases 5 and 6 together are shorter than Phase 2. Maybe by the fall, things are going to pile up as a lot of stations move at the same time, and everyone will be strapped in time to manufacture [equipment]. That might be where the rub might come. If we survive that, great. If not, I hope the FCC can be lenient with those stations.”

Bill Harland, VP of marketing for ERI-Electronics Research, a maker of antennas, transmission line and RF components and provider of tower construction services, sums it up: “This summer’s going to be very, very busy.”

The good news comes from the hardware side of the repack effort.

Transmitter vendors say business is booming due to the repack and that production floors are operating at full capacity, with no slowdown in sight.

GatesAir expanded manufacturing for the repack is “right on plan” and the company is meeting its commitment dates on deliveries, says Ray Miklius, VP-GM of the company’s Television Products Group.

Several large customers including Hearst Television, Cox Media and CBS are ahead of schedule.

Miklius says about 30% of his customers are spending more than their FCC reimbursement in order to get higher power transmitters, either to maximize their ATSC 1.0 coverage or to support vertical polarization for future ATSC 3.0 services that require mobile or handheld reception.

In a few cases, transmitter installations and/or testing have been complicated because an antenna isn’t installed yet or more small RF components are needed than originally planned. That has necessitated returns trips to some customer sites.

“We’ve built up a bunch of installation crews, and we’re doing well,” says Miklius. “If there’s any trouble with supply it’s with the OEM RF guys, the makers of filters, elbows and combiners. We’ve seen the lead times extend significantly.”

“We seem to have the resources internally and externally to meet the timelines,” Fiore says. “The pipelines with our subcontractors have been a little more difficult to manage, particularly with the RF systems suppliers, but we’ve made it through and I think we’ll meet the requirements.”

Fiore isn’t that critical of those vendors. He says he understands “the desire not to overcapicate the facility unless you definitely know you’re going to get the order.” And he says there is another reason why there are sometimes last-minute requests at transmitter sites for parts like elbows.

“Most of the good RF engineers that TV stations used to have all retired, and now they’ve got IT-based engineering groups,” Fiore says. “There’s nothing wrong with IT-based engineers, but they don’t understand RF, and laying out hardware for them is a little different than racking and stacking.”

To streamline the installation process for customers, Comark is consolidating equipment by taking delivery of RF components from suppliers and storing them with its transmitters, ready to be shipped together.

Rohde & Schwarz is also consolidating its transmitters with third-party RF components at strategically located storage facilities across the country. And to avoid surprises, the company is performing full site surveys and installation for about 60% to 70% of its customers, says National Account Manager Graziano Casale.

Casale agrees that Phases 4-7 will “be a big test” for the repack process. “As of now, we have met every single deadline,” he says. “But it has taken long nights and extra work, pushing hard.”

“Hectic” is a good word to describe the pace at antenna maker RFS, says Vanderkerken. The company has ramped up production of RF components in Australia and antennas in Connecticut even more than originally planned due to higher-than-expected demand.

While RFS has met its customer’s deadlines, he says, “I wouldn’t say everything’s been done on time in the easy way.”

The very nature of RF work lends itself to surprises, he adds, despite detailed planning.

“These days, everything’s on a computer in 3D,” he says. “Then you get to the installation site and there’s a little wall in the way and the parts don’t go everywhere they should.”

RFS is storing several completed antennas on its Connecticut campus for customers who are waiting for tower crews to be available. Competitor Dielectric is doing the same for customers at its Maine plant.

Dielectric has booked orders for 738 antenna arrays and already shipped 320. But 120 of them wound up being put into storage as customers wait for rigging crews to perform installations or first complete structural modifications to strengthen their towers for the new gear.

Dielectric is also building about 6,000 feet of transmission line per week, says Martin. He concedes that there is high demand for smaller RF components and says the company has dedicated one of its manufacturing lines to building elbows, gas barriers and field flanges 19 hours a day.

“We’re building at a level we’ve never built at before,” Martin says. 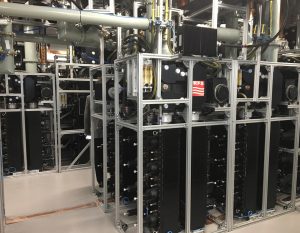 Dielectric has been promoting its TFU-WB wideband UHF antennas, which are designed to be side-mounted at a lower spot on a tower, as an interim solution for stations that are able to procure an STA from the FCC to operate at a lower power on their new channel.

Around 30 repack stations are now operating under STAs. Martin says the FCC could help stations facing difficulties by either extending the current six-month limit on an STA, or making it easier to obtain a second, subsequent STA. He predicts that up to 50% of stations in Phases 4-6 could wind up needing one.

Pursuing STAs is definitely a viable option, says Sinclair’s Arnold, who visited the FCC last Friday to meet with its repack task force to update officials on the group’s progress.

“They made it clear that STAs will be granted if there are reasons for them to be granted,” says Arnold. “If it’s documented, they will work with the broadcasters to give them more time.”

Sinclair was granted an STA in Toledo, Ohio, due to construction problems on its tower there. It is likely to pursue another in Portland, Ore., where it hasn’t even begun work on the main tower because of storms.

Arnold thinks the industry still has a good chance of meeting the repack deadlines as long as stations and vendors cooperate and the FCC continues to be flexible with broadcasters.

He says that safety remains Sinclair’s top priority, pointing to fatal tower accidents that have already occurred during the repack (one in September 2017 in Miami and one in April 2018 in Fordland, Mo.; neither is a Sinclair station).

Netflix Cuts Definition Of A ‘View’ Down To 2 Minutes