Artificial intelligence in news is evolving beyond metadata tags. It can now help news organizations find and monetize content, generate silent videos and highlights reels and even predict trending news, and ABC News and the CBC are among the broadcasters experimenting with its capabilities.
By Jennifer Pallanich | May 16, 2019 | 10:30 a.m. ET. 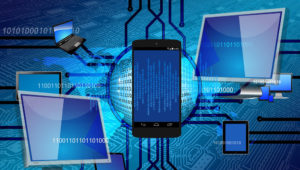 Artificial intelligence (AI) technologies are still largely in the proof-of-concept stage in many newsrooms, but the capabilities are finding their ways into various organizations including ABC News and the CBC.

That’s happening as AI’s business case begins to make itself clear and decisionmakers become satisfied with reliability levels, although some questions remain about the assumptions behind the algorithms.

And it’s emerging that AI technologies extend well beyond the ability to assign metadata tags to video assets in Media Asset Management (MAM) systems. Newer offerings can use AI to locate and monetize content, speed research, make content more findable for viewers, generate silent videos and highlight reels, confirm the quality of closed captioning and predict what will become news. One company even provides what is billed as the first operating system for the world of AI.

Producers at ABC News have used speech-to-text capabilities for quite some time, and there look to be opportunities to expand that by “making it a core part of how we organize incoming content,” says Fabian Westerwelle, executive director for media and technology.

Currently, ABC News is migrating off a home-built MAM with disparate solutions onto Dalet’s MAM, he says, so it will wait until the transition is complete to implement AI into more of its archival content. Once the transition is complete, any time video is generated or fed into the newsroom, it will be possible to “apply to it enriching technologies such as speech to text, facial recognition and create the additional metadata and attach it right away,” Westerwelle says.

Even though the processes will be carried out by AI engines, humans will still be involved at some level, he says. ABC News “won’t just hand over controls or overly trust AI feedback,” but will require human verification, Westerwelle says.

The question of reliability is one each organization will have to make on its own, notes Bruce MacCormack, head of business strategy/media technology and infrastructure services at CBC/Radio-Canada.

AI is “just a different way of analyzing data with a lot more power. It’s going to involve learning to make a decision based on probability,” MacCormack says. “Is it something we can live with, and how does it change the culture of precision in the newsroom?” 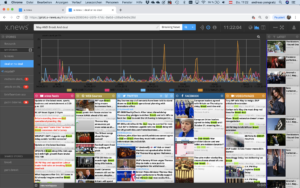 Similarly, he notes, bias in the data can lead to bias in the ongoing use of the system. For example, if only videos of “men in white coats” appear during discussions about science, “it will teach the system that a woman in a white coat is probably not a scientist, and that will have an impact on the story you tell.”

On the other hand, AI can offer a significant upside to newsrooms. The question, Fourcher says, is whether news stations, which tend to have tight budgets, will decide whether the costs of AI will outweigh the value or not.

The balance may tilt in favor of AI when it makes it easier to locate or monetize existing content.

Heather Palmer, the program manager for the MAM project at CBC, says the organization is using some basic AI, such as speech to text, and has interest in the potential of facial recognition and image and object detection for the archives as a means of “surfacing metadata” about its “massive collection” of images in an effective way.

“There are probably some gems in there we don’t know we have,” Palmer adds.

Relevant archived content can be used to flesh out a current story in progress, but it can also be monetized if an organization chooses to make it available to other groups, says Joe Newcombe, head of sales and marketing at Support Partners, which integrates cloud-based AI technologies into workflows.

Newcombe cites as an example President Trump, who has been in the news since the 1970s. Most of that content remains in deep archives, “not tagged or searchable because they didn’t know he’d be president.” An organization that has identified such Trump footage through the use of AI engines would be able to monetize it, he says.

AI can also be used to help journalists find content and conduct research.

“It enables them to make their raw video footage be discoverable and quickly identify precisely what they need without going through the old way of searching,” Shen says. “Our goal is to make production time one-tenth of what it used to be.”

Carrying out research is another time-consuming task when it comes to storytelling. X.news provides a browser-based collector of relevant information in one place, which X.news CEO Andreas Pongratz says can make users up to 90% more efficient and faster.

The system, built on machine learning, indicates whether information being presented is from a verified, or qualified and trusted, source.

“The big difference here is we are not working in one silo,” Pongratz says. “We are working with millions of assets brought together into our system.”

Arnaud Elnecave, VP of marketing at Dalet, says AI can be used to help acquire visitors and encourage them to stay with digital content longer to better monetize it.

“What you need to do is build a binge machine,” Elnecave says.

It requires not just a good understanding of the audience’s demographics and history but also solid tagging and a recommendation engine that will serve up stories on the same topic that are useful to the audience, he says. The Dalet Media Cortex aggregates several AI services and connects them to the customer to make it possible to tag content.

Another factor in favor of AI is when it helps meet the demand of efficiently providing news, weather or sports content to multiple platforms.

Television meteorologists must produce content for multiple channels that meets the expectations set by viewers accustomed to the Netflix experience on mobile, notes Rodney Thompson, the digital strategy senior offerings manager for The Weather Co., an IBM company.

“Television meteorologists already had a full-time job getting an excellent story out on air, and now they have to do that for social and mobile audiences,” Thompson says.

He says “augmented intelligence” can be used to take a minute-long clip intended for mobile and turn it into a silent video by stripping out the most important words a meteorologist said and overlaying them on the screen. IBM’s Watson is learning distinctions, such as between “chance of rain” and “rain showers” to deliver accurate information on silent weather videos.

“We’re taking a process of making the video that was reliant on listening to what the meteorologist said, and doing something fairly hard for the meteorologist to do manually — silent video,” Thompson says. “We’re not looking at this to replace the people of science who tell the story, but augmented intelligence scaling them beyond what’s humanely possible.”

He says viewers have had positive feedback on silent videos.

“For the longest time, we’ve thought about what we do in television and how take that to mobile, and for the first time we’re starting to see what’s working well in mobile and bringing it back to television,” Thompson says, noting some viewers leave their large-screen television on with the audio down while in other rooms and look at it when they walk by. With AI’s help, they can see the overlay and gather the relevant information in a glance.

An AI engine that has been taught how humans comprehend sports can be used to quickly piece together critical events in sports into a highlights reel and have the intelligence to prioritize content based on length, says Ramki Sankaranarayanan, managing director, Prime Focus.

To decipher what is happening in a game based on multiple cues requires “a fair level of sophistication,” he says.

CLEAR, a cloud-based SAAS solution from Prime Focus, has been used to highlight cricket matches by Cricket Australia and others.

AI can also track what’s trending on social media with a local audience to predict what will be viral with that audience four to six hours in the future, says Daniel Anstandig, CEO of Futuri Media.

Content about to go viral in the Cleveland market. (Source: Futuri)

“An interesting challenge that assignment editors have is they have to operate with little information and gut-level instincts to make big decisions about what their newsroom is going to cover and where they’re going to allocate resources over the next several hours,” Anstandig says.

Topic Pulse analyzes millions of posts and uses AI to predict what will be important in that audience in the near future to help the assignment editors make such decisions.

A number of different AI engines exist, and no two perform the same way.

Responding to that problem, Veritone built an operating system for AI, or, as Mike Morper, VP of product marketing, puts it, “we’ve created a layer of AI that orchestrates AI.”

“Artificial intelligence quickly identifies the things that are happening, so that the mere mortals like the rest of us can quickly find that information, then repackage it quickly,” Morper says. “Our customers aren’t talking about AI. What they’re talking about is a way to much more efficiently find the content that they want to use.”