Back to TVNewsCheck Home Print this page
DMA 4: PHILADELPHIA

Reporter/anchor Chris O’Connell feels a new relevance to his work at Philadelphia’s WTXF as he reports now as a one-man band from the field or his car. But through this “seismic shift,” he misses the camaraderie he used to share with the station’s videographers.
By Michael Depp | April 22, 2020 | 5:30 a.m. ET.

Coronavirus be damned, some people just aren’t great with working at home.

Chris O’Connell, a reporter/anchor at Fox-owned WTXF Philadelphia (DMA 4), radiates being one of them. A 25-year veteran journalist who’s spent the last nine years at the station, O’Connell is one of the 80% of the station’s workers working remotely since the pandemic began.

But “remotely” isn’t always synonymous with “from home.” That’s an important distinction for O’Connell. “It’s not a work-from-home situation really,” he says. “It’s a work-kind-of-supplementing-home.”

Mostly, it’s a work-from-his-car situation. O’Connell spends the bulk of his time now on the road chasing down the pandemic’s far-ranging impacts across the city, armed with his iPhone and MacBook Pro. He was adept at multimedia journalism skills before MMJs were even a thing. So when the coronavirus settled in and dropped six feet of social distance between himself and his videographer colleagues, he dusted off those skills to start working again as a one-man band.

Albeit a safety-first kind of one-man band. “I wear rubber gloves all day long. I’m now wearing masks when I do interviews. I’m doing interviews with boom poles,” he says. 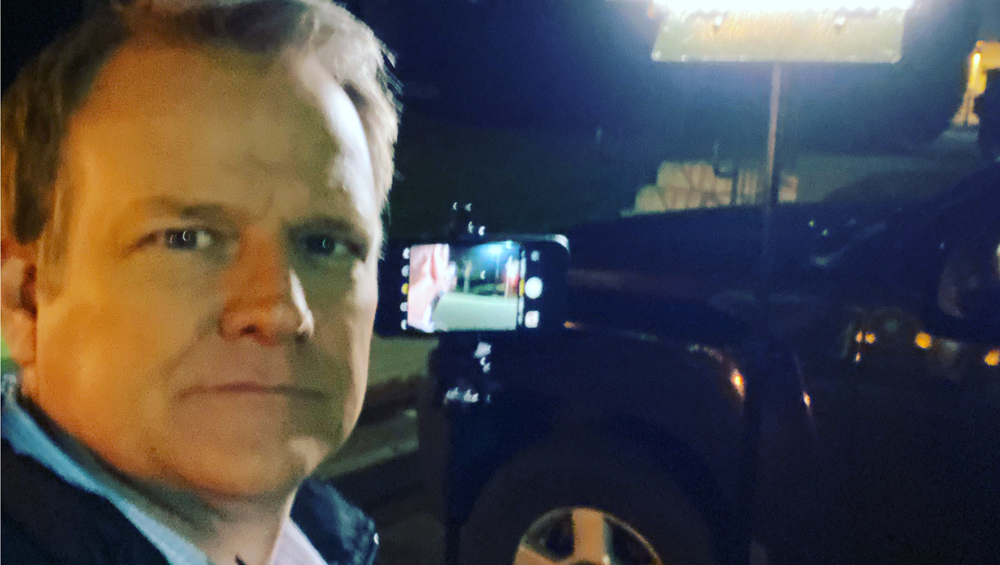 He is actually working from home sometimes, too. “If I am close by to my story, I will run home and use the setup [there],” O’Connell says. “I also use it in lieu of going to the station. Before I report to work, I am at my little office that I set up, making phone calls, watching the news and whatnot.”

The thing about a reporter like O’Connell, though, is it’s hard to shelter in place when the story of a lifetime is unfolding around you in all directions. Not that he didn’t try. One of his first remote pieces was on his own twin 10-year-old daughters’ home schooling experiences. He asked one of them, a budding videographer, to document her first week.

“Of course, we didn’t know how long this was going to be going on,” O’Connell says. “So she shot it. I got all this video and put together a story using her video only, including interviews she did, and we did a story of what home schooling was like through their eyes.”

But as any parent working from home with school-age children now knows, the cohabitation can be tough. “Three weeks later, it’s a hell of a lot more challenging than on day one,” O’Connell says.

In fact, by three weeks later the novelty of dad working at home had worn off for everybody, and O’Connell was logging most of his time back out on the road again. “I am not at home because the story just isn’t at home,” he says. “If I were to do a story on local businesses shutting down, I would go live from Main Street of that town.”

Or, as the case may be, back to his old high school. That’s where he’s found one coronavirus story that’s been paying dividends — about a student making surgical face shields with a 3D printer. “He had produced a total of 50 of these face shields and he sent them to New York,” he says.

O’Connell went to the student’s house, where he conscripted the boy’s parents into shooting some iPhone footage of him at work inside to augment his own footage. The story took off.

“Now this kid is the sole supplier of the face shields at this one hospital, Holy Redeemer Hospital in [suburban] Montgomery County, and really it was because of our story,” he says.

Then there was another story about the Limerick Generating Station, a nuclear plant also in Montgomery County that needs to be refueled every couple of years and requires about 1,800 temporary workers to do it, O’Connell says. Locals were rumbling about the risks of bringing in the out-of-town workers to do the job. Now a number of those workers have tested positive for COVID-19.

“It was exactly what they were afraid of,” O’Connell says. “Something you wouldn’t even think of like this routine refueling at a nuclear power plant that would get zero news coverage, all of a sudden people started asking questions and we started looking into it.”

O’Connell sees such stories — and the larger moment in which they’re unfolding — as fueling a new era for TV news. “Local news has had somewhat of a renaissance through this story,” he says. “People are looking to their local news. They want to know the numbers in their state, their county, their city.”

He feels his own small place in that moment. “We are [people’s] window to their community,” O’Connell says. “We have a responsibility, and I think all journalists know that.”

He also recognizes that what’s happening now will have longer-term changes on how the industry operates. “There’s been a seismic shift in the way things are done,” O’Connell says. “Breaking news, crisis handbooks will be rewritten after this.”

Like many of his peers at stations across the country, O’Connell doesn’t yet know what those changes will look like. Probably they’ll involve more remote working. Just not too much, he hopes.

“The one thing I really miss is the camaraderie,” he says. “The videographers I work with, I miss that creative energy, that teamwork, that collaboration. I know that it will probably come back. We just have to get through it.”

This is typical fake news..Keep repeating it and maybe someone will believe it..