Its projection drops 5% to $18.5 billion, saying political, OTT and digital advertising will slightly balance the negative effect of the pandemic on local advertising.
By Mark K. Miller | May 21, 2020 | 6:23 a.m. ET.

BIA Advisory Services has lowered its early second quarter 2020 forecast for U.S. local TV advertising due to the COVID-19 pandemic. Its new revenue estimate is $18.5 billion, broken down to $17 billion for over-the-air revenue and $1.5 billion for digital revenue, compared to the $19.4 billion forecast earlier this year. Overall, the numbers still reflect the election year and a slight increase over 2019.

“Local television stations, like all media, will see significant decreases in advertising from many business verticals like travel, leisure and retail,” said Mark Fratrik, SVP and chief economist at BIA Advisory Services. “Political advertising will buffer those decreases in many markets that have competitive senatorial and gubernatorial races and in presidential battleground states. Plus, continued growth in OTT and digital will help to soften the impact of the pandemic on advertising revenue.”

The forecast also reflects $10.44 billion in retransmission consent agreements between local television stations and cable/satellite companies/virtual MVPDs expected in 2020. BIA predicts that on a market-by-market basis, retransmission fees will continue to rise, based primarily on rate increases in each market.

Speaking to the forecast, Fratrik says: “Since we completed this forecast in early April, over 25 million Americans have filed for unemployment insurance and there is continuing economic concerns as the country moves to open back up. We expect political advertising will increase very quickly, and we anticipate certain verticals will rebound more quickly than others. It is going to be a dynamic marketplace this year, and we will continually monitor the nationwide and local economies to update our forecast based on new information.” 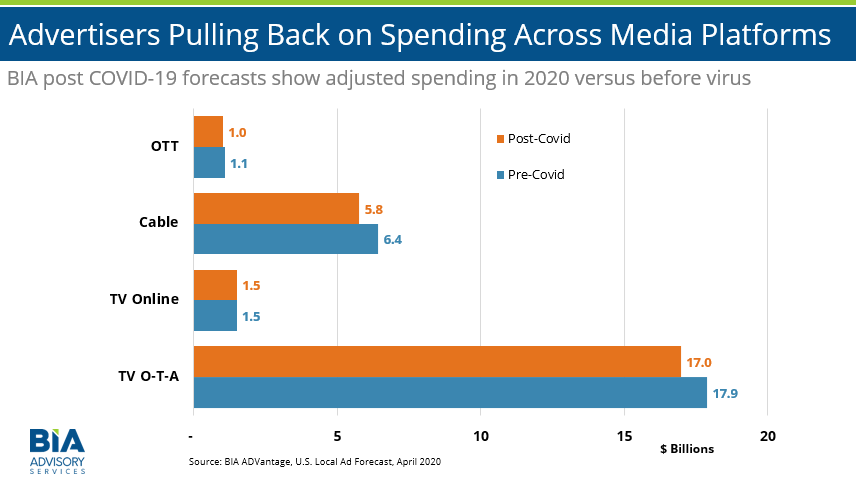