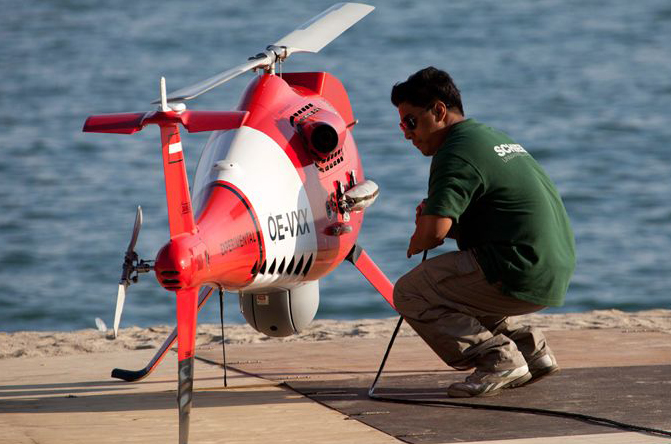 They may. The FAA has begun writing licensing regulations and safety requirements that would allow unmanned air vehicles (UAVs) to be used for purposes including newsgathering by 2015. They would be a less costly and potentially more capable replacements for manned helicopters.

TV newsgathering gadgetry doesn’t get any sexier than the Camcopter S-100, a military-grade unmanned air vehicle, or UAV, manufactured by the Austrian Schiebel Corp.

Now, thanks to Schiebel’s partnerships with the U.S. companies Brain Farm and Snaproll Media, both of which specialize in aerial photography, the Camcopter is capable of capturing high-def, broadcast-quality footage, while hovering over anything from wildfires and disaster zones to high-speed police chases.

The Camcopter is one of a growing array of UAVs or drones that are being developed for broadcasting, public safety, search and rescue, agriculture and other commercial applications — all in anticipation of new Federal Aviation Administration regulations authorizing and governing such uses.

Drones are a less costly and potentially more capable replacement for manned helicopters. But before ENG drones routinely hover over burning buildings, broadcasters are beginning to realize they may have to fight a battle at the FAA and in Congress over when and how they can be deployed.

Housed in small, shared on-campus space, the lab received a $50,000 Knight Foundation grant to get underway. Waite says he’d ultimately like to get permission to operate UAVs.

According to Waite, drones are attractive on a number of levels and cost is among them. Their one-time expense is considerably less than operating manned helicopters, which can run into six figures every year. “If I can buy this for a half-million dollars, it’s still a savings,” Waite says.  “From a business standpoint, it makes perfect sense.”

Drones can also be faster and easier to deploy than manned choppers, he says. “I can foresee a time when newsrooms have multiples of them.”

The drones are essentially downsized aircraft, either fixed wing or helicopter-style, operated by remote control. They come in a variety of sizes and configurations with some small enough to fit into a trunk of a car. Prices range from several hundred thousand to $40,000.

The Camcopter looks lot like a conventional helicopter, complete with rotors, a vertical tail and two front legs to land on. It weighs just 243 pounds, stands 44 inches high and is about 10 feet long. It can fly up to six hours at 138 miles per hour.

It can be programmed to fly or operated remotely by people on the ground. “You’re not risking human life to get a great shot,” says Snaproll’s Preston Ryon.

With a starting price of about $400,000 according to Rotor & Wing magazine, the Campcopter is pretty much the top of the line of UAVs suitable for broadcasting.

Under existing regulations, unmanned aircraft, including recreational models, are limited to flying below 400 feet and within sight of their operators. They also are prohibited from flying over heavily populated areas.

But a new law is changing that. Signed by President Obama in February, it requires the FAA to come up with licensing requirements and safety regulations for commercial drones flying far and wide by 2015. The agency predicts that by 2020, there could be 30,000 drones in the American skies performing all kinds of jobs.

Meantime, Rep. Edward Markey, a Massachusetts Democrat who co-chairs the Congressional Bi-Partisan Privacy Caucus, has drafted drone legislation intended to protect the privacy of people on the ground. One provision would establish a public website listing drone licensees, as well as when and where they will be flying.

RTDNA Executive Director Mike Cavender doesn’t believe that putting UAVs to work in news should cause much concern.

But others have already begun raising issues and warn against giving broadcasters carte blanche.

“Unlike airliners and helicopters, drones are actually designed to conduct surveillance,” says Amie Stepanovich, who, as legal counsel for Electronic Privacy Information Center, has asked the FCC to impose regulations that would require operators to make their UAV flights public.

“They are designed to have very invasive equipment to watch people’s movements,” she says.

EPIC has petitioned the FAA to make the drone licensing process completely transparent and to hold licensees accountable by detailing how, where and why they plan to use drones.

Requiring drone operators to inform the FAA, as well as the public, if they go outside the parameters of those plans would help curtail civil rights violations by news operations, she says. Footage unintentionally captured by a drone on the way to cover, say, a crime or disaster scene, could be subject to approval, or deletion, under such a plan.

The way journalists see it, however, those sorts of restrictions are an affront to the freedom of the press.

“To say that the content that is derived from the use of this technology needs to go before some type of organization for scrutiny just violates the very precepts of the First Amendment,” Cavender says.

Add safety to the mix of concerns that the FAA has to weigh in regulating commercial drone use and the issue gets even thornier.

“If the FAA starts approving drone licenses on a per use basis, then the government is licensing journalistic activity, which appears contrary to First Amendment principles,” Waite says. “But I think even the most ardent First Amendment defender — which I include myself among — would agree that there has to be rules to ensure safety.  They balance is going to be the tricky part.”

Over the next few years, Waite plans for the Drone Journalism Lab to establish a set of guidelines based on research and analysis to help news teams use the technology once it becomes legal “instead of winging it.”

“I am hoping this is an opportunity for us in journalism to look at a technology and think about its ethical and responsible use before it is thrown upon us,” he says.

Waite says he hadn’t planned on becoming engaged in the regulatory issues, but may. “We’ll certainly take a look.”

Mickey Osterreicher, the National Press Photographers Association’s general counsel, is also watching the FAA’s proceedings, but is not actively involved at this time.  He believes the issues surrounding drone journalism will wind up playing themselves out in the courts as they arise once the media starts using the technology.

“Obviously, the use of [drones] by journalists may constitute an invasion of privacy,” says Osterreicher. “It won’t surprise me” if pot growers caught on camera are among the first to equate being caught by circumstance on camera with tantamount to unreasonable search and seizure, he says.

“It’s going to take awhile before the law catches up with the technology and that’s the case with all new technology,” he says.

The issues are remarkably similar to those raised with the introduction of the first handheld cameras in the late 19th century, when “everyone was so worried about the fact that these cameras were going to invade everyone else’s privacy,” he says.

“But as we know, the world didn’t come to an end, the law caught up to this new technology and life went on,” Osterreicher says.

“Even though the drone is different, I think the overarching concept is still the same, ” he adds. “Eventually, just like with GPS tracking, just like with cell phones, we will get a body of law that deals with these things. There’s a lot going on out there, and we’re just going to have to see where this goes.”

“The issues are remarkably similar to those raised with the introduction of the first handheld cameras in the late 19th century, when “everyone was so worried about the fact that these cameras were going to invade everyone else’s privacy,” he says.”
The main difference is the handheld cameras were attached to people, not flying over my house streaming live video back to some unknown news operation. Although I am heavily involved in news production, I think the introduction of drones flying domestically opens a window than can never be closed.

Why was my comment removed? I cautioned station managers that this “news drone” proposal creates huge potential legal liability issues involving privacy rights and public safety, and I also offered the opinion that the FAA was putting promotion of aviation contractors ahead of public safety by opening the door to thousands of drones in the skies. Another poster offered a rude response, to which I did not reply, and yet my comment was deleted. WHY?