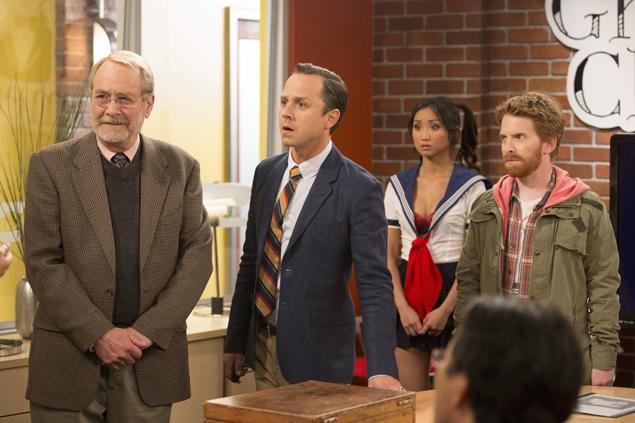 PTC listed the following as sexual scenes that were featured in this episode:

“Last year,” PTC President Tim Winter said, “the Fox Broadcast Network filed formal comments at the FCC urging the elimination of broadcast decency enforcement, and now we’re seeing why they did so. The airing of this kind of sexual content, especially during the so-called ‘family hour,’ may violate the law that Fox and other broadcasters are so eager to purge. The Supreme Court held that law in place, and today we are urging members of the public to file a formal FCC indecency complaint over this episode of Dads.

“Parents who have been told repeatedly by the entertainment industry to rely on the TV content ratings system have been fooled once again given this episode’s very low TV-14 rating. How is a semen scene appropriate for 14-year-old children?

“If parents can’t rely on the television ratings system to give them accurate and consistent information about the programs their families might be watching, then the system is worthless — serving only to give the networks cover as they continue to push the limits of what is deemed acceptable for the broadcast medium.

“We urge the FCC to investigate this ‘Dads’ episode on behalf of families across the nation,” Winter concluded.

Yes, the government should decide for all of us what we should watch.

I can’t help but wonder what the folks at PTC would say about any and every episode of Two Broke Girls? The stuff transcribed in this article pales by comparison with some of the “snappy” dialog between the two co-stars on TBG.

I barely saw any of that episode. I tuned in at the beginning, but had to turn it off after about four minutes due to the sequence in which one character tries to make another dry-heave by describing various forms of vomit.

And all of this while sexist crap like “The Bachelor” airs in the exact same time period on Monday with a homophoic bigot… give me a break!