Going Beyond ‘If It Bleeds, It Leads’

A recent conference from the National Press Foundation, Radio Television Digital News Directors Association and Arnold Ventures offered journalistic paths out of conventional — and damaging — TV news crime coverage conventions. All newsrooms would do well to check in with the ideas raised there.
By Emily Barr | January 25, 2023 | 5:30 a.m. ET. 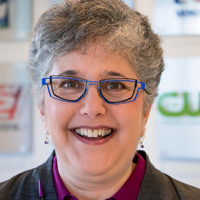 A couple of months ago, I wrote an article about the way TV news covers crime and suggested there must be a better way. Thanks to the National Press Foundation, the Radio Television Digital News  Association and Arnold Ventures, I believe a new path is being forged.

On Jan. 12-14, 100 news directors and news leaders from across the U.S. gathered in San Diego for a deep dive into how crime is covered, the sources we lean on for information and data, the stereotypes we inadvertently reinforce in the process and the toll all of this “if it bleeds, it leads” takes on the victims, the accused and the journalists trying to make sense of it all. A single three-day summit does not lasting change make, but it planted a stake in the ground, and I hope it will encourage station groups and individual newsrooms to assess and change a pattern that is decades in the making.

For far too long, newsrooms have relied heavily, if not solely, on local police and district attorneys as their primary source when covering crime. And because local television news is a leading source of news for most Americans, it is imperative that local news journalists fully understand the criminal justice system and know where to go to parse the data, explain the circumstances and tell their stories objectively and factually. Local newsrooms are literally defining their communities by what they choose to cover and how they frame their stories. The good news is, there is a wealth of information out there if you know how to access it.

Melissa Luck, Morgan Murphy’s news director at KXLY in Spokane, Wash., told me the summit provided her with a gut check — crime statistics do not always match up with the coverage they provide. “Every market, large and small, is dealing with the same challenges, so it was incredibly worthwhile to have this time to reassess what we are doing,” she said.

Luck came away from the summit determined to create a comprehensive, written crime coverage policy for her station. She added that she feels a great deal of responsibility to understand what her crews are facing in the field, especially when covering particularly violent crimes such as school shootings because, much like the victims of crime, reporters and photographers often suffer their own form of PTSD taking a toll on their mental health and wellbeing.

Luck wants to see journalism schools and universities teach their student journalists how to access and explain data, submit Freedom of Information requests and understand the wealth of publicly available information if you just know where to look. Teaching future journalists the basics is imperative, according to Luck, because once they land at a TV station, there aren’t always the resources or time to prepare them.

For Robert Thomas, Gray Television’s news director at WKYT in Lexington, Ky., the summit proved to be a welcome step back from the day-to day and an opportunity to reflect on how to cover crime trends rather than just reporting on one-off stories that often do not receive the follow-up they should.

Thomas particularly appreciated hearing success stories from other news directors and acknowledged that the police remain an important part of the equation but should be treated like any other source, their information double-checked and verified before using it on air. Not surprisingly, he wants to see newsrooms engage a broad cross-section of their staff when formulating coverage policy because collaboration promotes buy-in, which in turn allows real change to occur.

Dan Shelley, RTDNA’s president and CEO, told me this was the most meaningful conference he has attended in a long time. Shelley said the no holds-barred conversation around race was critical for the attendees and he hopes the NPF and RTDNA will be able to host additional summits going forward. According to Shelley, RTDNA and NPF plan to make the summit available on line in the coming weeks. Every news director, producer and reporter unable to attend would do well to watch it.

The summit came together thanks to Arnold Ventures, a nonpartisan, philanthropic organization dedicated to criminal justice reform, health care, education and advocacy, but it was programmed entirely by NPF and RTDNA with the two journalism groups choosing the speakers. Arnold covered the cost of travel and lodging for the attendees.

At the end of the day, summits like this one have the power to effect real change. Let’s hope the broad and diverse group of attendees share what they learned and amplify the message that “if it bleeds, it leads” is no longer the driving force behind TV news. Our communities will be much better for it.

The way TV news covers crime must absolutely change, but I fear it will never will. Why?

Crime is an easy and cheap story to cover.

It’s easy to cover because the coverage is so formulaic. Assignment editor hears scanner traffic about a shooting. A reporter and photographer — or more likely, a MMJ — goes to the scene to shoot the usual video of crime scene tape, police cars, officers milling about. The reporter will talk to a police PIO, maybe a witness, maybe even a relative of the victim or the accused. Presto, an easy story to help fill the growing news hole in many TV station schedules.

It’s cheap to cover because many newsrooms are understaffed. Do you think a small market station can afford to invest in the investigative and data journalism that provides crucial context? Even large market stations are dealing with budget cuts. For those newsrooms, it takes little to no money to simply regurgitate the “facts” presented in a police press release.

Broadcast news groups must invest the time and the money to effectively change crime coverage for the better. But they’re too busy finding new revenue streams and adding extra newscasts without adequate staffing.

“For far too long, newsrooms have relied heavily, if not solely, on local police and district attorneys as their primary source when covering crime… it is imperative that local news journalists fully understand the criminal justice system and know where to go to parse the data, explain the circumstances and tell their stories objectively and factually.”

Explain the circumstances? Someone robs a bodega and beats the crap out of the clerk and local news should report the story from the robbers viewpoint? We can’t take the cops or the victim’s word for it!

“Shelley said the no holds-barred conversation around race was critical for the attendees…” Ah, so it’s not the truth the matters. It is the politics. As fewer and fewer people trust the media, keeping quiet about crime or dismissing stories because you’re uncomfortable with the race of the perp is not going to have the desired effect you’re looking for.

I’ll believe it when I see it If it bleeds it leads it will remain as is.

Reference for above mentioned conference: the National Press Foundation has published several articles with video links, transcripts and resources, from the conference that Emily Barr mentions. They can be found here: https://nationalpress.org/topics/criminal-justice/