Back to TVNewsCheck Home Print this page
REPORTING ON PROTEST: CHRISTINA GONZALEZ

Reporting On Protest | In A Heated Moment, Reporter’s Tool Is Context

Christina Gonzalez: At KTTV in Los Angeles, I witnessed firsthand the dangerous intersections of protesting, looting and police misunderstanding. For everyone involved, including our viewers, it was an object lesson in the importance of context to understand what’s happening right before your eyes.
By Christina Gonzalez | June 9, 2020 | 5:30 a.m. ET. 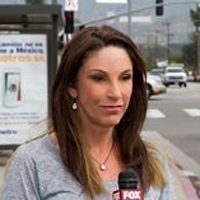 I’m a reporter at KTTV Fox 11 in Los Angeles, where my photojournalist colleague Joe Prince and I had been covering the unrest in Los Angeles after the questionable death of George Floyd at the hands of police in Minneapolis. We were following a group of young people on foot and in vehicles. They appeared less interested in protest than the cell phone stores and pot shops they were seemingly trying to break into along a hub of middle-class, mostly minority-owned businesses on Van Nuys Blvd., a San Fernando Valley suburb of Los Angeles.

We were interviewing a pair of mini mart owners holding large shotguns to protect their business. With them was a group of area residents who were helping. They’d come to stand with the owners, they said, to help the people who’d often assisted them with free diapers or milk when they had no money to get them for their children.

Suddenly, six young men emerged from hastily-parked vehicles, heading towards a shuttered gold jewelry store some 50 yards away from us. The residents we were talking to yelled at them to stop. The market owners joined in as the young men argued back, snarling to leave them alone and mind their own business.

We were on live television. Looking back at the clip, I see myself crawling forward, trying both to explain to my anchors what was happening and get the microphone closer to the interaction. I stepped back when I saw two of the young men putting their hands in their pockets, handling something I didn’t want to get too close to.

That’s when we saw the police cars drive by. One of the residents flagged them down. I joined her, relieved when they turned around after first passing us by. Helmeted LAPD officers stepped out of the cars and towards us, and we told them possible looters were confronting the store owners, while some of the suspects were already running down the street.

Before we could finish explaining the scenario, the officers grabbed the people helping out and put them against the wall, starting with the middle-aged African-American woman who had just finished telling us that she’d never let hoodlums hurt the people who had helped her give milk to her babies.

Now the mostly white group of officers had her, her husband and brother against the wall in handcuffs, despite our pleas that they had the wrong people. Meanwhile, the gun-carrying owners, who were white, were ushered in the store, uncuffed.

We were still live. Our anchors voiced their shock. My managing editor repeated “be safe!” in my earpiece. Unbeknownst to us, viewers were already starting a social media frenzy, sharing the live feed, exclaiming, “You see why we protest?”

Eventually, we got the officers to understand who was who. They took the zip tie handcuffs off the residents. The LAPD’s public information officer, who watched the scene unfold on TV, rushed to the scene to join us, trying to put what we had just witnessed in the context of officers securing a scene they knew nothing about.

Later that evening, we caught up once more with the woman who had tried to help. She told us her name, Monette Watley, and tried to add her own context to the story.

“I understand the protest,” Watley said. “I understand what this is about. I get it… I am fighting for the same protest. But we don’t want people from other cities to come and tear (apart) where we live because we have to rebuild this.”

She told us she understands tensions are high, but thinks police need to do a better job responding in minority communities.

“I understand they’re tired,” Watley said. “They’re worn out, too. We’ve been worn out. I’m 55, we’re tired too. The same injustice you did to us years ago, and my fathers and forefathers, you guys are doing to our young black men, our young black women, including Latinos.”

We all agreed the incident was unusual, but only in that it happened on live TV. Watley had protested in the Los Angeles ’92 unrest, which I also covered extensively. Back then, by the third night, over two dozen people had been killed in this city, one of them in front of my cameraperson and me while we followed looters along Koreatown. I remember standing next to the man’s body – he was a security guard – thinking we needed to cover him before we went live, out of respect.

In my 19 years with KTTV and before that as an anchor with Univision, I’ve had plenty of experience covering protests. I’ve seen firsthand children and elderly people roughed up by police. I took a police baton to the back of the neck myself covering a May Day protest in 2007. My cameraperson fared worse that day, getting her hand and ankle broken.

When I’m covering events like this, I never want to be more than a fly on the wall. But as the police swept up to the mini mart this time, the thought racing through my head was ‘just don’t tell me they’re going to slam the African-American woman against the wall who was trying to help.’ Then that was exactly what they did.

I’m a Cuban-American woman, and I’ve seen this before. Being slammed against a wall is what happens in a black or minority neighborhood. It doesn’t happen in Beverly Hills.

This time, I intervened, as I have done before, attempting to explain to the police who was who and to cool down the situation. The police needed context, and I was a reporter with a camera and a live feed. I was grateful my station continued to keep it that way, blowing away commercials to stay on what was important and unfolding in the moment.

Context is critical. It diffuses a situation, literally in this case. The police eventually took their zip tie off Monette Watley. But what would have happened if we hadn’t been there?

I’d like to think the same, although it might have taken quite a bit longer. Still, the question hangs over us, as we continue reporting from the streets in a historic American moment, trying to put what’s happening in context.

Christina Gonzalez is a reporter with Fox Owned Stations’ KTTV in Los Angeles. In the face of the protests, KTTV has dramatically expanded its live news coverage, more than doubling its regular weekly hours, including primetime, for several nights last week.

TVNewsCheck wants to hear from journalists on the ground reporting from the protests across the U.S. Email Editor Michael Depp at [email protected] to share your story.