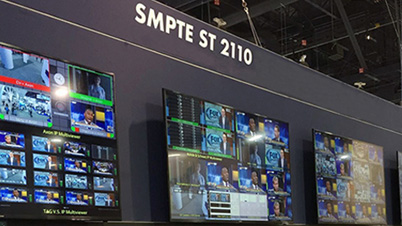 As the broadcast industry coalesces around the new SMPTE standards for managing media over IP networks, there is still one piece missing: a compression standard to conserve bandwidth.

The SMPTE ST 2110 standards are great news, since they will allow broadcasters to run traffic between facilities entirely on IP, rather than maintaining different facilities for SDI and IP.

But uncompressed video over IP gobbles up great amounts of bandwidth. So at least in the short term, some say, compression technology and standards will be key to easing the upgrade path, especially for distributed and cloud operations.

“But the next step is to also get some of these low latency compression technologies standardized, so that we have ways of getting more video through smaller pipes. Not everybody’s going to want to put in a 12 Gb/s connection.”

Compressed video is not part of the suite of standards yet, but it’s coming. Currently approved portions of the SMPTE ST 2110 standards cover system issues, baseband (uncompressed) video and PCM (uncompressed) audio.

The compressed video format standard, known as ST 2110-22, is “very much in a working draft stage now,” says SMPTE President Matthew Goldman, who is also SVP of technology, TV and media at Ericsson.

Support for compressed video and all AES3 formats will be in development during 2018, Goldman says.

While SMPTE won’t usually comment on specifics of works in progress, Goldman says, he did indicate that the compressed video standard will include “hooks into ST 2110 … that will allow compressed video to be carried in a 2110 environment.”

“For a subset of use cases, having low latency compressed video is very interesting, and we have a few service providers that are very keen on having that added to the standard,” Goldman says. “But most of the use cases are for uncompressed audio and video.”

In fact, ST 2110 is designed from the ground up to be bandwidth-friendly and flexible, in the sense that audio, video and ancillary data are carried in separate IP streams (still synchronized) so they can be routed and processed independently, without the need for specialized extractors and embedders.

That bundling can be problematic, bandwidth-wise. For example, a user may simply want to capture program audio, but “winds up receiving the entire video bundle, which in 2022-6 could be one-and-a-half gigabits worth of IP data,” said John Mailhot of Imagine Communications in a recent SMPTE Standards webcast.

One of the big questions on the table is: which compression algorithm (or algorithms) will be best for IP production and playout?

TICO stands for “TIny COdec.” It is touted not only for its tiny footprint in hardware and software, but also its “tiny” latency — or delay — in data transfer.

There are now at least 42 member-companies in the TICO Alliance that are interested in seeing the technology become a standard for new IP-based live ecosystems.

According to product information, TICO provides extremely low latency with visually lossless compression up to 4:1, which allows simultaneous transmission of up to three streams of 2160p60 over 10 Gbps Ethernet.

The algorithms underlying TICO are now actually the basis for a broader compression initiative known as JPEG XS, according to Jean-Baptiste Lorent, director of marketing and sales for IntoPIX.

“We are now in a phase where TICO is moving … to a future ISO standard,” he said.

Grass Valley is a TICO Alliance member, and CTO Chuck Meyer is a strong proponent of the compression technology.

“The JPG XS effort has been embraced and is moving rapidly through ISO,” Meyer says. “Some of us in broadcast went with TICO early, so we can look at that and have some confidence that it’s been deployed in our industry. And that would make it very easy for broadcast industry to say, ‘Look, we’ve got an ISO standard for XS; let’s use it.”

Once the JPEG XS standard is complete, possibly as soon as summer of 2018, it will offer a new low-latency solution for IP transport that will support running increasing resolutions (think 8K) through standard bandwidth interfaces without compromising image quality or consuming too much power.

Given these developments, what actually gets included in the ST 2110-22 specification for uncompressed video might depend on the timeline and progress of the ISO working group behind the development of JPEG XS, sources say.

But the details of ST 2110-22 have yet to be decided, and IP transport doesn’t have to be a single codec world.

For sure, TICO and JPEG XS are not the whole story when it comes to low latency compression over IP.

There is the patent free and lightweight VC-2 codec from Barco Silex. Sony developed a low latency video codec. And according to developer NewTek, NDI is “one of the most efficient codecs in existence” for transmitting large numbers of video streams across broadcast infrastructure.

NewTek is set to release a 1 RU hardware product that will enable three streams of 2110 as inputs or outputs between NDI and 2110, according to Brian Olson, vice president of product management.

“We’re not trying to make people pick one or the other,” Olson says. “I use the apples and oranges analogy—both have their places and applications, and we want to make sure customers are able to use both.”

Im obliged for the article.Really thank you! Awesome.

“It’s in fact very complex in this active life to listen news on TV, therefore I simply use web for that reason, and get the most recent news.”

Really appreciate you sharing this article post.Much thanks again. Will read on…

Thank you for your blog.Thanks Again. Really Great.

Thanks for sharing, this is a fantastic blog post. Cool.

I loved your article post.Much thanks again. Really Cool.