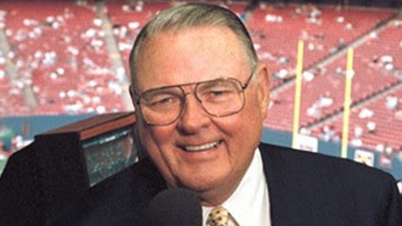 Nearly 400 family and friends gathered Sunday on the field at the historic stadium where Jackson, the folksy voice of college football for decades on ABC, called a record 15 New Year’s Day games — the last in 2006. Jackson died on Jan. 12 at age 89.

PASADENA, Calif. (AP) — Keith Jackson was remembered as “the Walter Cronkite of sports broadcasting” and a loving husband, father and grandfather away from the broadcast booth in a memorial service at the Rose Bowl.

Nearly 400 family and friends gathered Sunday on the field at the historic stadium where Jackson, the folksy voice of college football for decades on ABC, called a record 15 New Year’s Day games — the last in 2006. A smattering of the public looked on from seats in the south end zone. The stadium’s radio and TV booths are named in his honor.

“This was Keith Jackson’s cathedral,” said Tim Brandt, who served as master of ceremonies and was one of several former broadcast partners who spoke during the 2-hour, 15-minute memorial.

Jackson came up with the Rose Bowl nickname, “The Granddaddy of Them All.”

It was an example of what ABC-owned Walt Disney Co. chairman and CEO Robert Iger via video called “Keith-speak.”

Offensive linemen were “big uglies.” A dropped ball was a “fuumm-bull!” Players were “young-uns.” A big play would elicit the cry “Whoa, Nellie!” although Jackson didn’t utter what became known as his signature phrase as much as viewers thought.

“I think I said it probably at least once a game,” said Bob Griese, who called games for 15 years with Jackson. “People would hear that and they just assumed he said it.”

Griese suggested to Jackson that he put the phrase on shirts and caps and sell them. Jackson rejected the idea, saying, “It’s about the kids. It ain’t about me.”

Jackson died on Jan. 12 at age 89. He lived in nearby Sherman Oaks.

He remembered the time Jackson stood up Alabama’s Bear Bryant. The coach kept Jackson waiting for an interview the day before a Saturday game. Finally, Bryant came over and said, “You want to see me?”

Jackson replied, “Not anymore, coach. We’ll try to catch you next time.”

Lynn Swann first met Jackson when he starred at USC and they later worked together calling games in the USFL.

“You never heard Keith talk down about a college player’s talent,” he said.

“Keith was our Walter Cronkite of sports broadcasting,” she said. “He’s trustworthy, accurate and totally respected.”

The second week he read the promo, Jackson mentioned he had watched the debut episode. “Someone needs to buy that woman some britches,” he said.

Harris, hearing the comment in his earpiece, busted out laughing.

Four large black-and-white photos of Jackson, including one with his wife of 65 years Turi Ann, decorated the stage, along with two sprays of red-and-white roses. The main stadium video board and two others played highlights of Jackson’s career that included the Olympics, college and NBA games, baseball, auto racing, and in 1970 he was the first play-by-play announcer for the NFL’s “Monday Night Football” on ABC.

Son Lindsey recounted what it was like having Jackson and his booming voice as a father.

“You guys got big uglies, fuumm-bull and Whoa, Nellie,” he told the crowd. “What I got was ‘Lindsey, why are the trash cans still out front? This homework needs more work, and the inevitable was how fast were you really going?’”

Jerry Johnsen recalled when Jackson first turned up at his family’s home to court his sister, Turi Ann.

“Keith gave me a quarter and said, ‘Go away for an hour,’” he said. “An hour later, I was back and he had another quarter in his pocket.”

Johnsen said Jackson always carried a wad of cash and used it to tip people. He once asked Jackson why he did it.

“I can’t buy the happiness I see on people’s faces when I give them a fifty dollar bill,” Jackson told his brother-in-law.

Johnsen said, “He was always thinking about the other guy. It wasn’t about the money. It was always about making them feel good.”

Melanie Jackson-Cracchiolo teamed with her husband, Tower of Power trumpet player Sal Cracchiolo, to salute her father in song. They performed “Too Marvelous for Words,” ″You Are So Beautiful,” and “When October Goes” against a backdrop of photos from Jackson’s career and family life.

“He never said too much and he never acted like he knew it all,” said Harvey Hyde, a former college football coach who was close to Jackson.

“Keith was the original,” Michaels said. “Not an original. There will never be another one like him.”

The best of the best..there will never be another like this man….”Ohhhhhhhh Nellie”….