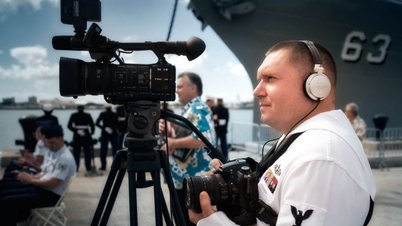 With the technical demands of running TV stations and related digital media increasing and requiring new IT and IP skills, broadcasters can’t just poach new hires from competitors. Among the alternatives are actively recruiting military veterans who have a number of valuable skills, especially IP and RF experience. This is Part III of a three-part series on the challenges facing broadcasters in finding the right people for the rights jobs.  Part I focused on the impact digital is having on station sales hiring and tactics. in Part II: It used to be a given that news managers would readily move it if meant a bigger market and a larger paycheck. Not anymore. Read all the stories here.

That fact is not lost on broadcasters.

They have for years tapped the military for technical help, but, with the technical demands of running TV stations and related digital media increasing and requiring new IT and IP skills, they are becoming more active in recruiting from the mustering out rolls.

On the case is the Society of Broadcast Engineers. With the help of members with military backgrounds, it is developing a program to reach out to service members as they transition back to civilian life, says Jerry Massey, president of SBE and regional technical operations director, southeast, for Entercom Communications.

“We want to make them aware that there is career opportunity for them in broadcasting,” he says.

The program would target those who worked in communications of some kind, he says. “Transitioning them into broadcasting would be a much easier thing to do than just bringing someone in who is completely untrained.”

At Hearst Television, VP of Engineering Marty Faubell says his group is getting “very aggressive” in going after military personnel.

“One of the things the military does is radar,” he says. “They do long wave, they do shortwave, they do RF. They don’t do high-power RF, but, if they have a fundamental understanding of RF that’s a heck of a good start.”

Hearst brought back one of its engineers who had retired from WCVB Boston to lead its military recruitment effort, Faubell says. Dave Kaylor, who was in the reserves and served two tours in the Middle East, travels the country in his hunt.

“We just spent the past couple of days down at the DINFOS [Defense Information School] military training facility in Fort Meade, Md., where the military does its broadcast journalist, broadcast engineering [and] graphics,” Faubell says. “It’s a very impressive facility, and we met some very impressive folks.”

Although the program is still in its infancy, Faubell says, it has already yielded several hires with whom “we are very pleased.”

Pursuing veterans is just one of the approaches that broadcasters are taking to hire the right people to make sure newscasts go off without a hitch, commercials run when they are suppose to and the signal never stops.

Many broadcasters still engage in the time-honored practice of poaching the best talent from other broadcasters with the promise of better money in perhaps a better market.

“In larger markets, it is somewhat as it has been in the past where [new talent] is [coming] from the smaller or adjacent markets, what I call feeder markets,” says Faubell.

“But as you go down in market size, the degree of difficulty simply gets worse and worse and worse. So, recruiting from our old well of our competitors in the smaller markets around us has dried up.”

And so the renewed emphasis is on bringing in people — either civilian or military — from outside the industry and giving them the specialized training they need to work in broadcasting. The preference is for people with IT schooling or experience.

“We started a plan where we are going to hire the best candidates we can find and grow them into broadcast engineers,” says Peter Sockett, director of engineering and operations for Capitol Broadcasting. “We will be hiring out of the traditional IT ranks and turn them into broadcasters.”

Complicating that task is the complicated nature of the work at a modern TV station.

Jason Effinger, chief digital and technology officer at Gray Television, says his group needs expertise in three distinct area — RF, core infrastructure and  “what I call workflow, basically concerned with getting everything through the infrastructure so it can get out to the transmitter.”

Of those, RF presents the biggest challenge. Few schools teach it, and, as Faubell pointed out, even the military doesn’t deal with it at the power levels that broadcasters do.

Transmitters have become easier to operate and to maintain, but that’s just the starting point, Faubell says. “From the output of the transmitter through the rest of the system, there is a completely different science involved in that — and danger level, quite frankly.”

Faubell notes that transmitter manufacturer GatesAir helps itself and the industry by running an RF training program. “In fact, there was a class a few weeks ago. We sent two people.”

Massey says that he has had success with finding people with good IT skills and training them for the unique broadcast chores.

“I have been doing that locally for many years — training an IT guy here and there in RF and then moving them on to become a director of engineering for one of our clusters. That’s proving to be a two-year deal, to train someone to convert over from IT to RF.”

The flip side of the problem, he adds, is “broadcast engineers who have been in the business for many, many years are having to learn the IT side.”

Faubell says that Hearst runs what amounts to its own “education department” that grants the equivalent of a two-year or four-year degree in broadcast technology.

It’s informal, but it’s effective, he says. “Sometimes we get the vendors in and assemble our staffs. On a rotating basis, we have done three of these a year on specific devices, specific technologies.”

The right people make all the difference, says Effinger. “A lot of the young folks joining our news, operations, production and engineering staffs have a lot of the intuitive skill sets.

“So, when they are faced with connectivity challenges and putting multiple pieces of gear together in an IT world, it’s not as big of a challenge for them.

“We will actually send those folks to a station not just to help lead a very complicated transition, but actually to do some teaching.

“We’ve found that to be very beneficial, having those experienced and trusted boots on the ground where they are really experts.”

The National Association of Broadcasters Education Foundation is trying to fill the need for entry-level techs with its Technology Apprenticeship Program. The six-month program includes a stipend and an internship at a radio or TV station. At the end of the program, NABEF will try to place each participant at a station near their home.

Now in its sixth year, the program has graduated 51 and found jobs for 25.

“There’s a growing need for new technology and engineering talent in the broadcast industry,” says NABEF President Marcellus Alexander, who doubles as EVP, television, for the NAB. “The TAP program was created to cultivate the skills of tomorrow’s engineers and technology leaders, providing a hands-on, interactive learning experience.”

The broadcast executives complain that they don’t always have the dollars to compete with other industries.

“I think that is especially true in the IT field,” Massey says. “We see that bigger corporations are paying and offering a higher salary base than what broadcasting is offering for a similar job.”

But broadcasting still has an advantage: cachet, says Effinger. “We are really talking about the folks — even those who are graduating now — who are saying, ‘I grew up sitting down with my parents watching this station, day after day for years…. Having an opportunity to work at the station is really something I am passionate about.’

“Despite all of the competition in media, when big things happen, whether it’s locally or nationally, television dominates. It dominates conversation and drives conversation on all platforms.”

This is Part III of a three-part series on the challenges facing broadcasters in finding the right people for the rights jobs.  Part I focused on the impact digital is having on station sales hiring and tactics. in Part II: It used to be a given that news managers would readily move it if meant a bigger market and a larger paycheck. Not anymore. Read all the stories here.