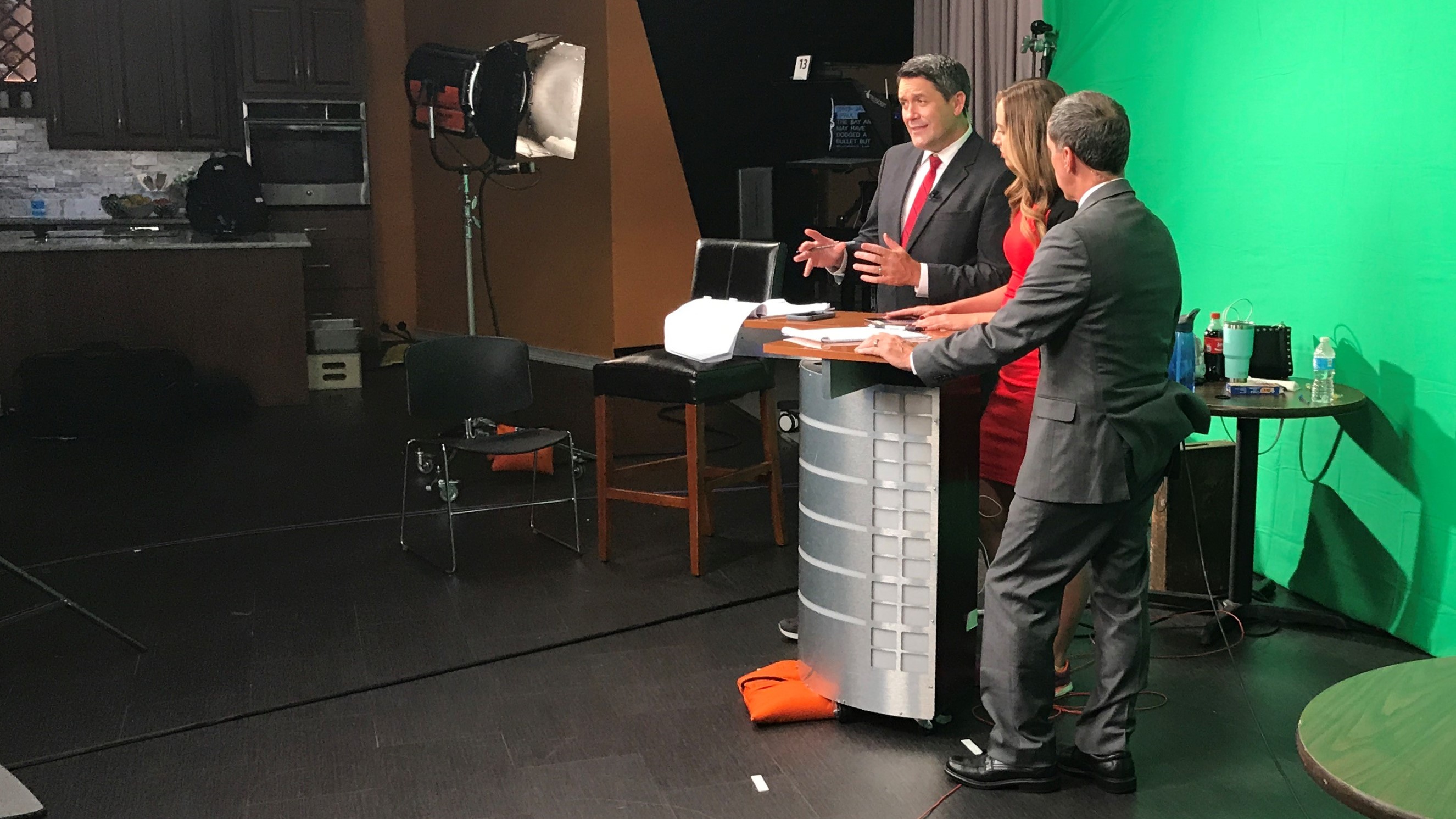 After deciding it had to evacuate its Cape Coral station in advance of Hurricane Irma, Scripps' Fox affiliate in a technical tour de force  continued to provide full local coverage with an anchor desk in Tampa (above), news production in Detroit and master control in Indianapolis.

Scripps and local managers had planned for what they would do if Irma threatened the Cape Coral station, and, judging on that Thursday that the facility was no longer safe, it put the plan into effect.

Everybody moved out of station, but it stayed on the air throughout the long weekend — from Friday at noon to the following Monday at 6 p.m. — as a fully functioning local news operation.

It took a flourish of technological wizardry that employed a wireless network, the internet, TVU Networks’ IP gear, Scripps’ considerable corporate resources and some long days for the staffers.

“It was incredible,” said GM Darryll Green, who had arrived at the station only a few weeks earlier. “We were able to provide coverage without missing a beat.”

From the hub, the fully mixed WFTX news programming was sent back to the unmanned Cape Coral facility where it was automatically relayed via the STL to the tower for broadcast.

WFTX abandoned its station, but never the market, said Ray Thurber, Scripps’ VP of technology. “The No. 1 thing that we wanted was to make sure we were never going to leave the viewers.”

To that end, said Green, an ancillary studio was set up within the offices of the Naples Daily News, 30 miles south of the station’s Cape Coral facility, and 11 crews roamed the market pumping out the live shots.

The Daily News was once owned by Scripps, Thurber said. “We reached out to them. They gave us newsroom space and studio space.”

WFTS’s effort was bolstered by 20 extra journalists and photojournalists that Scripps sent in from out of state. (WFTS Tampa and Scripps’s other Florida station, WPTV West Palm Beach, also got platoons of reinforcements from corporate.)

The backbone of the virtual station was TVU Networks’ bonded cellular backpacks and transceivers, which are normally used for in-market live remotes.

The TVU gear was used not only for linking the remote crews, Tampa anchor desk and Naples studio to Detroit, but also for sending the mixed news programming from the Detroit control room to Indianapolis and then from Indianapolis to Ft. Myers for broadcast.

The wireless network was used for the remotes, but broadband internet was used for the inter-city hops. “We were not worried about losing the feeds from Detroit or the Indy hub,” said Thurber.

Producing news for two stations kept WXYZ busy, said Thurber. “At one point [on that Saturday], we had two live shows going at the same time. We had a pre-game show for Michigan’s game against Cincinnati, and then in the next newsroom we were doing Ft. Myer’s news.”

For the remotes, he said, reporters and photographers used conventional cameras tethered to TVU packs as well Sony streaming cameras.

The Sonys, which have integrated cell cards, “did really, really well during the storm,” Thurber said. “They were awesome.”

Thurber worked closely with TVU in the planning and execution and TVU executives were excited to have been a part of it.

“They handled it brilliantly,” said Chris Bell, VP of technology operations, TVU. “They were flexible. They were agile. They adapted. People can learn from this. It was just cool.”

Because WFTX uses a virtual set, Green said the temporary Tampa studio was able to use a green screen to give its newscasts the “same feel as our [regular] set with the same graphic packages, the same weather packages — everything our viewers were used to was there.”

In retrospect, the effort was unnecessary. The Cape Coral station came through the storm unscathed. But there was no way to know that last Thursday night in the face of the oncoming hurricane.

WFTX played it safe without diminishing its coverage, Green said.

“I don’t know if it could have gone any better.”

On top of it: the meteorologist in the photo shown (with his back to the camera) is from Scripps’ station in Idaho.