The newly-rechristened NextGen TV will start showing up in working sets at January’s CES with launches slated for the top 40 markets. But a ramp up to revenue will be slow going with advocates saying revenues are at least five years away. The TV2020 panel on the topic comprised (l-r): Anne Schelle, Pearl TV; John Hane, Spectrum Co.; and Joe Chinnici, Public Media Group. (Photo: Wendy Moger-Bross)
By Glen Dickson | October 24, 2019 | 10:07 a.m. ET.

Broadcasters are on track to launch ATSC 3.0 broadcasts in the top 40 markets next year, though they aren’t ready to share any details. Consumer electronics manufacturers should have real working 3.0 sets at the CES show in January, but meaningful revenues from the NextGen TV platform are probably at least five years away.

Those were the key takeaways from “Investing In and Capitalizing on ATSC 3.0,” a panel discussion at TVNewsCheck’s TV2020 conference moderated by TVNewsCheck Publisher Kathy Haley and featuring executives from three consortiums of local stations formed to launch and monetize 3.0 services.

Anne Schelle, managing director of the Pearl TV station consortium, said that Pearl and its partners in its Phoenix Model Market, which include NBC, Fox, Univision and some public broadcasters, have already proven out the 3.0 launch model.

Schelle said Pearl members and other ATSC 3.0 proponents, like the Spectrum Co. consortium founded by Nexstar and Sinclair, are busy doing the hard work of reaching channel-sharing agreements but are on track to launch 3.0 in the top 40 markets, and 61 markets overall, next year. And they have shared their rollout plans for 2020 with their TV set manufacturer partners in Phoenix: LG, Samsung and Sony.

The initial investment required to launch in those 61 markets is relatively low, at $72 million, said Schelle. But that number is expected to climb as broadcasters launch more sticks and create single-frequency networks (SFNs) to improve coverage.

Schelle said that the Pearl TV stations are first “focusing on the home” for 3.0, and pointed to the Consumer Technology Association (CTA)’s recent approval of the “NextGen TV” consumer branding logo as an important step heading into January’s CES 2020 show. Audience member John Taylor, LG SVP of public affairs and chairman of the CTA’s video division board, confirmed that a variety of manufacturers will show 3.0 sets at CES.

“We expect to see real working sets on the floor of the show in Las Vegas in January, and coming on the market, in our industry, normally in the spring-summer time frame,” Taylor said.

However, Schelle said it may take until 2025 for enough receiver devices to hit consumer living rooms and enough 3.0 sticks to light up to deliver the necessary scale required for broadcast-driven businesses like addressable advertising. It may be longer still for nontraditional businesses like leasing spectrum to third parties for data broadcasting, such as sending software updates to automobiles.

“I think you’ll start to see scale for TV sets in 2023, 2024,” Schelle said. “You’re going to see revenues, but for return on investment, since we’re investing in more and more infrastructure, I think five years.”

Spectrum Co. President John Hane agreed that the ramp up to revenues will be slow, particularly for new businesses like data broadcasting. That’s because at the outset broadcasters are “not going to have a lot of data to sell” as there will only be one or two 3.0 transmitters operational in early markets. That will change as more markets and more sticks come online.

“We could have a small amount of revenue in one or two markets specifically in 2021,” Hane said. “You’re not going to notice it. I’m going to be realistic. The devices are going to be expensive, and it’s going to be sort of proving a concept.”

Hane said Spectrum Co. is looking at an actual commercial deployment in 2021 where there is already some 3.0 capacity. With more such capacity over time, it can introduce more services.

“We’re not going to have national services; we’re sort of frozen out of the national market immediately, because we’re not national,” he said. “But as we get to the national market, as we prove we’re going to be nationwide, then we can get the kind of engagement we want, the customers that would bring the big dollars.”

His company, which has private equity firm Black Rock as its major financial backer and also counts established broadcast engineering firm Osborn Engineering as a partner, has raised $5 billion in capital to build out a national 3.0 transmission and data center infrastructure. It will then serve as a middleman for broadcasters to lease part of their spectrum to B-to-B customers like academic institutions and utilities. 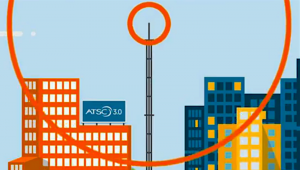 “We’re in this for the long haul, and we’re all collectively interested in building a nationwide network,” Chinnici said. “That’s going to take us 10 to 15 years at minimum to build out. Luckily, we’ve got liquidity, the capital to pay for all that. So for you guys, it’s really a capex versus opex decision. Use our money, compete in front of the camera, don’t compete behind it. Use a shared-service type of thing.”

Public Media Group, a public benefit corporation, will count commercial broadcasters as well as public broadcasters as clients. It plans to begin building in the first quarter of 2020.

Speaking privately after the panel, Chinnici said PMG has already completed advanced engineering for 36 markets, with the idea of creating an SFN consisting of five to six transmitters in each market.

While Haley wanted to talk about the “when” of ATSC 3.0 — as in when broadcasters might see a return on their investment — much of the conversation still seemed focused on the “why,” as Schelle and Hane continued to make the case for why 3.0 is so important to broadcasters’ future.

That may be because there still seems to be uncertainty about the 3.0 rollout. Broadcasters announced at last April’s NAB Show that they would launch 3.0 in the top 40 markets by next year, and the FCC formalized the application process to launch 3.0 services in May.

But since then, news of launches has been scarce. Only seven applications for 3.0 have been filed at the FCC, from one Class A station, KSBB-CD, in Santa Barbara, Calif., and six LPTVs spread across Idaho and Oregon. All were granted, and no further applications are pending.

An executive with a key 3.0 technology vendor, speaking on background, said that the Pearl and Spectrum Co. groups haven’t identified any call letters of the stations due to launch 3.0 in 2020. Instead, they have just identified the markets, and left the vendor to guess at which stations are involved.

“We’ve had to do our own homework,” said the executive, who added that 3.0 orders have come in and that interest was high at NAB NY.

While NBC and Fox were part of the NAB announcement and are currently working with Pearl TV members in the Phoenix Model Market, neither CBS nor ABC has publicly expressed any support for 3.0. And the cable industry has also recently expressed opposition to the new standard.

Executives from Charter Communications met with the FCC in late July to explain that they don’t intend to carry 3.0 signals as “ATSC 3.0 is not backwards compatible with any existing equipment in the home or in the MVPD ecosystem” and “broadcasters have yet to adopt standards for the equipment necessary for MVPDs to provide ATSC 3.0 signals to subscribers.”

Then in August, the Society of Cable Television Engineers reportedly expressed reservations about 3.0 implementation across MVPDs in a memo to ATSC President Madeleine Noland, and said SCTE was going to delay integration work.

For her part, Schelle said that the Phoenix Model Market partners are “working with all of the MVPDs,” which she considers an important part of the 3.0 launch.

“We have an MVPD test environment in Phoenix, and we’re looking to integrate with the MVPDs to allow the features and functions that are in the 3.0 standard to be enabled for MVPD viewers as well,” Schelle said.

Hane said that 3.0 is a way for broadcasters to ensure they get revenues from both advertising and subscriptions going forward, which he said is essential to survive against their digital competitors.

Hane, a lawyer who formerly negotiated retrans deals for both broadcasters and MVPDs, already considers retransmission consent fees as subscription revenue. But he said stations can do better with 3.0, by both protecting their retrans leverage and giving them the ability to launch new, direct-to-consumer subscription services.

As they consider 3.0, Hane thinks broadcasters are too focused on maintaining picture quality in their ATSC 1.0 over-the-air signals, which eventually will need to be degraded somewhat as part of the transition as more and more 3.0 stations come online and 1.0 signals are “stacked” into less and less spectrum.

He said the current distribution model for 1.0, where cable operators already recompress the broadcast content for the vast majority of viewers, is already fundamentally flawed.

“Let’s think about our technology choices and how they affect revenue,” Hane said. “What we do today, is we are spending enormous amounts of time and money — and lost revenue opportunities — to provide a pristine over-the-air signal to 15% of the viewers, who receive over-the-air, which we monetize the least.”

Meanwhile, Hane said, the 85% of viewers who watch broadcast TV through cable and effectively generate the lion’s share of revenues (from both advertising dollars and retrans fees) often receive an inferior picture.

“What choices do we make there?” Hane said. “We don’t require the MVPDs to pass through an equal or better quality signal that we put out over the air. So the incentive we’re creating by our technology choices today is to for people to leave the paid platform, which has a lousy picture, and move to the free platform, which we go to the ends of the earth to make beautiful.

“It doesn’t make any sense,” he said. “We should be putting our focus on making sure that those who pay get at least as good a picture as those who don’t.”