The social media content workflow within the greater broadcasting workflow has typically required different tools and teams, but vendors are automating, integrating and streamlining to drive efficiency.

Being the first to break a story on multiple platforms can generate big wins, such as increased engagement and more downloads of their apps, for broadcasters who invest in the necessary infrastructure. At the same time, journalists don’t want to cede all decision making to an automated system, so at least one vendor is offering hybrid automation when it comes to managing social media tools.

The amount of interaction on social and mobile apps during election week in the U.S. was “just through the roof,” says Ray Thompson, Avid’s director of market solutions, broadcast and media, and is “a good reason for media companies to invest in the infrastructure to do that and do it well.”

By example, he points to an Avid MediaCentral customer in France who broke the news about the Notre Dame fire. Afterward, he says, they analyzed the impact of being the first one to air and social media with the news, and “it was significant.” It allowed them to monetize the content on their own app and a number of people saw the news in their feed and downloaded the app, he says.

Avid’s MediaCentral Publisher is an add-on, cloud-based app that customers can use to replicate content “pretty much instantly” into the cloud environment, where the aspect ratio can be changed and graphics, closed captioning and advertising can be added, to name a few tasks.

The speed at which that happens makes it possible for broadcasters to “get the story out and get it out fast to use social media platforms to drive eyeballs back to their own apps so they can monetize it.”

Automation is one of the tools that reduces fatigue and repetition, but according to Social News Desk President Kim Wilson, newsrooms have fluctuated in how much automation they’re willing to use.

“We’ve seen newsrooms go from 100% manual publishing to pushing the boundaries of automation and doing as much automation as possible, and then starting to pull back from that,” she says. “They’re saying: ‘We’re journalists and subject matter experts. We don’t want to turn everything over to a place where journalism isn’t part of the decision-making process.’” 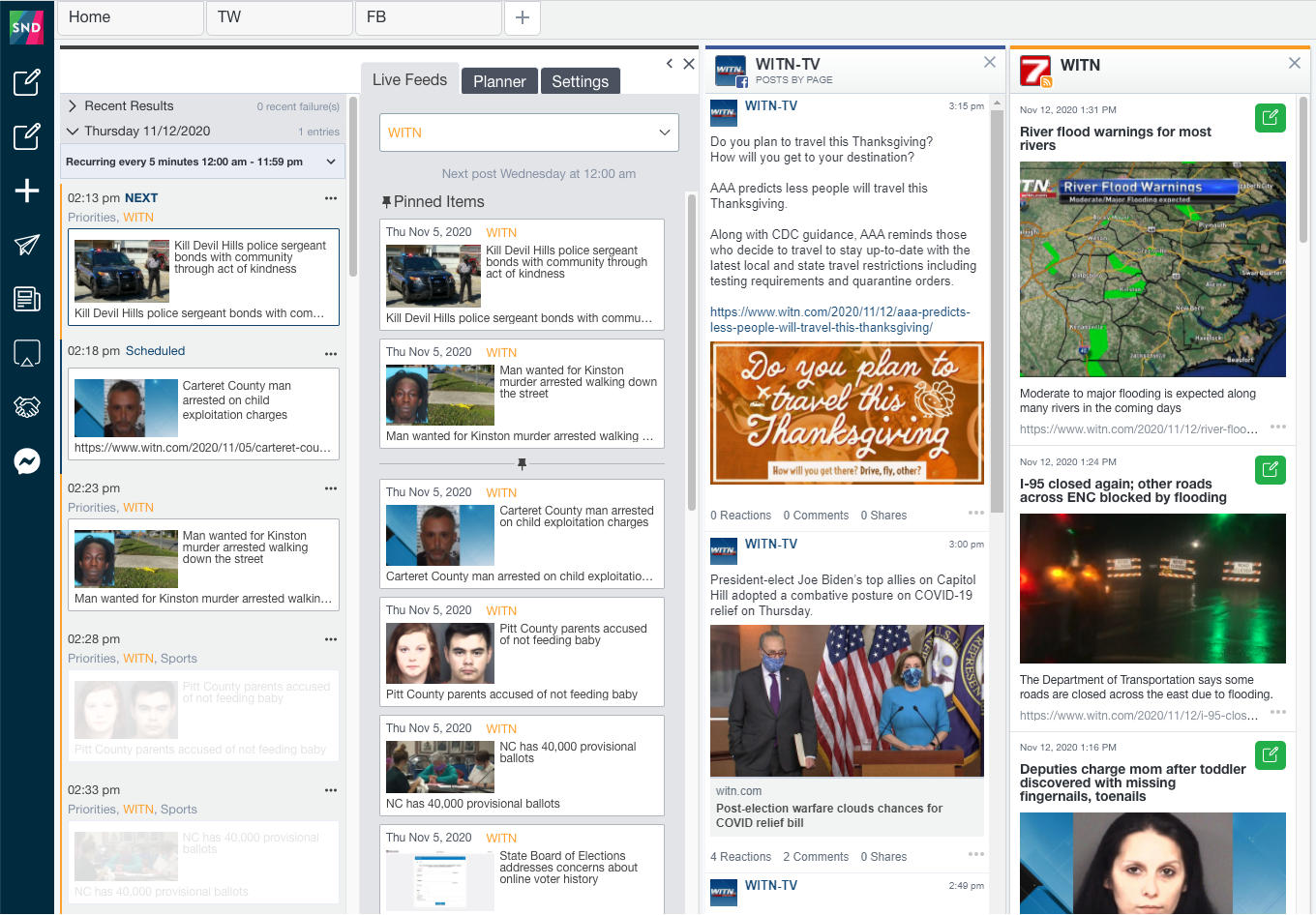 Because newsrooms are looking for “some assistance” in terms of decision making, SND developed hybrid automation that “blends artificial intelligence with good old-fashioned journalism,” she says.

The result is a tool that blends data science and AI to identify content that’s overperforming on social media, a website or within a media group as a whole then make suggestions via the SND dashboard and allow the journalist to decide how to proceed.

CBS Local is one of the groups in SND’s test drive team using the hybrid automation solution this year.

“It takes some of the manual work out of it to make the most out of some of the content they’re creating,” Wilson says.

Several hundred newsrooms are using this hybrid automation during the beta phase, and SND expects to release it widely in 1Q 2021, she says.

Dalet is focused on changing how newsrooms plan, create and publish content for both social media and digital platforms, he says, and this affects not just scripting tools but editing and other tools as well.

“It’s a set of tools that varies a bit from the traditional editing setup tools,” Cospen says. “We are trying to bring everything together into the same toolset.”

Cospen describes Dalet Pyramid as a place where, for a single story, the user will be able to access all the functionalities at the editorial and operational levels. It allows ingest of content from different sources and indicates who is assigned which tasks, he says. 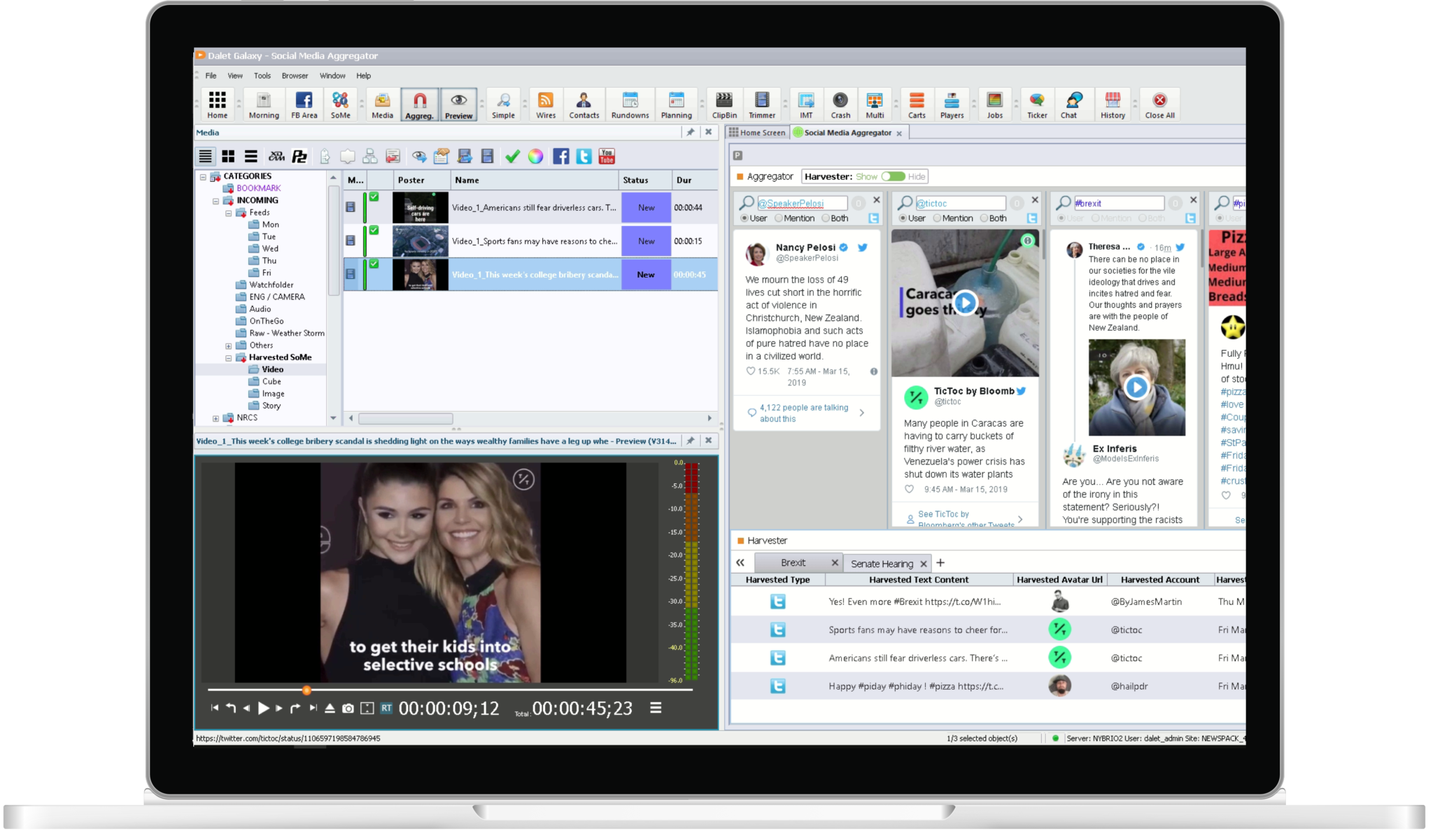 Dalet’s Social Media Framework Aggregator Panel makes it possible to leverage social media for their evolving narratives in the newsroom.

The upshot is the ability to have “a single-user interface with everyone that can do his piece. So, different specialties, different job profiles are collaborating together at the same time through the story,” Cospen says.

Further, he says, because it will give the digital team access to all the production tools, it will create the opportunity to “go digital first, meaning leave the freedom to the digital team to take the lead on a story, rather than waiting for the story to be produced on TV and broadcast on TV before it can go even to social media platforms.”

“You can easily create one website post and link it with 15 different social media posts created automatically for you,” says Peter Grena, presales consultant, Octopus Newsroom.

That is especially convenient, he says, when there is one topic, but multiple stories and multiple social media posts required. Grena says a 24/7 channel in Michigan uses Octopus to rapidly create and publish social media content to multiple locations, specified by region, once a story airs.

And Octopus makes it possible not just to plan the posts and schedule when and where they publish, but also to harvest existing social media content and efficiently turn it into a useable graphic, he says.

Gene Sudduth, national sales director, North America, for Octopus Newsroom, says Octopus has a special API integration with Vizrt, which makes it possible to drag the content of a tweet directly into a rundown, “and it will automatically select the proper graphic template and display that immediately.”

“Trying to fit a digital workflow into a broadcast rundown doesn’t feel like the best match for those types of workflows,” Doyle says. It would be a “difficult marriage to make between the two.” 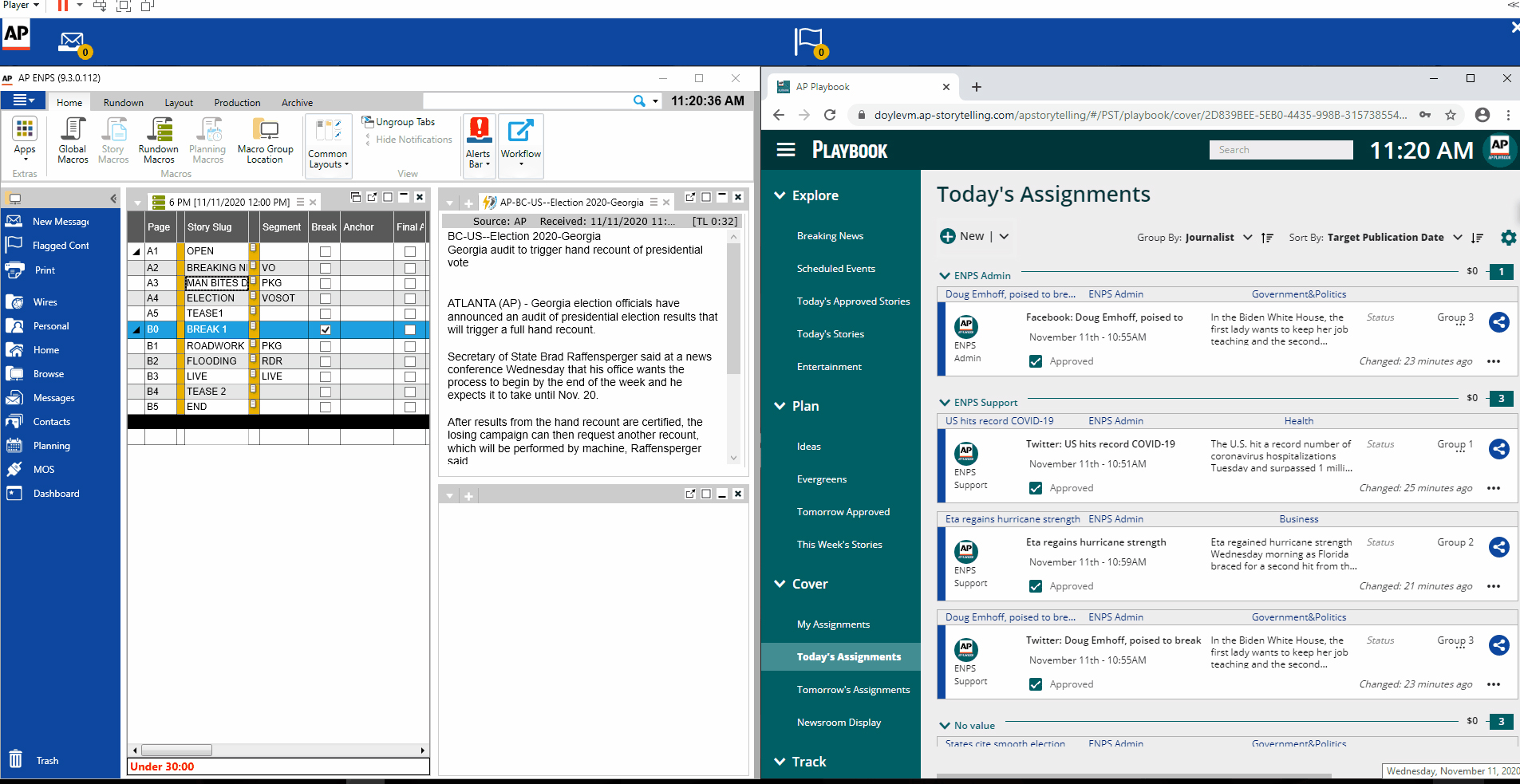 AP’s ENPS and Playbook work together to enable newsrooms to schedule and publish social media content.

“There’s still some tool fatigue out there,” he says. “You find yourself in five or six or 10 different tools throughout the day.”

AP is investigating how to “get them the tools to reduce that tool fatigue and bring them into a single experience and not five or six or seven or eight different experiences and user interfaces,” Doyle says.

Ross Video is focused on decreasing the turnaround time needed to create and publish social media content, says Jenn Jarvis, the company’s product manager, editorial workflow. That means, she says, “a more coherent workflow” with an integrated approach for social and web content.

“If we can bring it into their core workflow and break down the barriers and extra steps,” Jarvis says, it makes it “more feasible” and allows customers “to focus on the content they’re creating” with a single tool and sign-in.

Many larger organizations have different teams using different tools and platforms for planning and creating content, she says. This can be problematic because it increases the possibility of the loss of information between teams or the duplication of effort, she adds.

But using a single platform like Ross Video’s Inception, which originated as a social media management tool before the NRCS element became available, can reduce those risks. 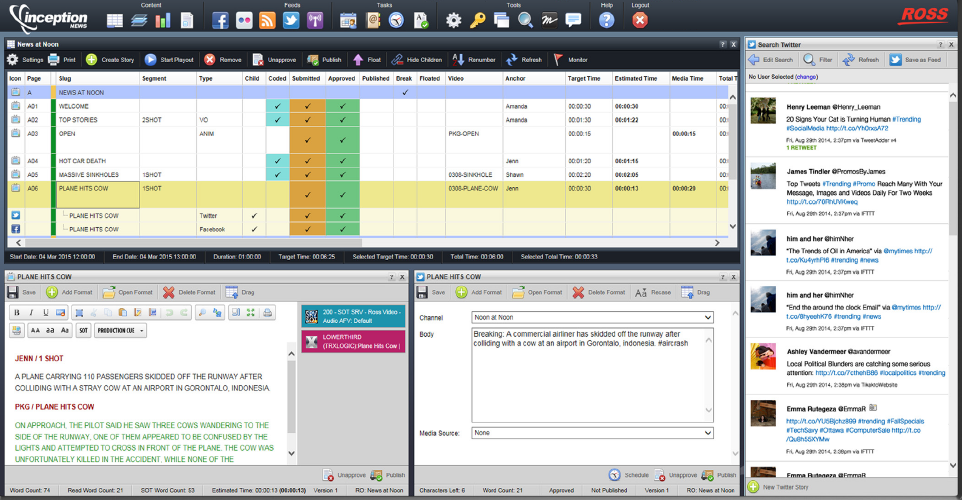 Ross Video’s Inception eliminates manual steps like downloading, resizing, reformatting, and copy and pasting content into the graphics system and includes an assignment manager that can be used to plan necessary content and assign tasks.

“By bringing these teams onto a shared platform, it allows them to plan together, to have visibility of what all the teams are working on,” Jarvis says. This is critical, she says, because “it can sometimes be labor-intensive to create content for different platforms, and it can be a distraction to the news teams when they have to think about 10 different platforms throughout the day.”

Inception eliminates manual steps like downloading, resizing, reformatting and copy and pasting content into the graphics system and includes an assignment manager that can be used to plan necessary content and assign tasks.

She says it’s the role of vendors to create tools newsrooms need to publish to multiple social media platforms, but newsrooms themselves have to embrace the need for multiplatform content creation.

“It does sometimes require a change in thinking and a bit of a culture change in the newsroom to think about content more comprehensively,” Jarvis says. “If we can break down those reservations by making the process easier, it’s going to encourage multiplatform content creation to become the norm.”