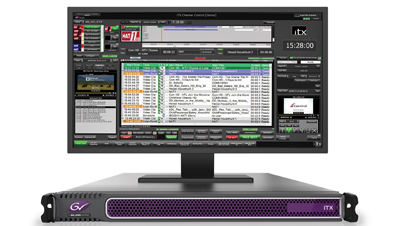 Everyone from smaller station groups to major playout centers are examining software- and cloud-based solutions as they look at consolidation, centralization and density of operations. But whether IP and virtualization can replace all SDI functionality today remains a “big question mark” for many broadcasters. Above, Grass Valley's iTX channel control. Click here to access TVNewsCheck’s NAB 2018 Resource Guide listing of master control and playout vendors and products or here to download it as a PDF.

Even as the 2018 NAB Show promises a stream of new and improved next-generation solutions for master control and playout, broadcasters are wading into the waters of software- and cloud-based infrastructure cautiously.

Sinclair recently took first steps to centralize some playout operations in the public cloud. The move helped it streamline and customize distribution of KidsClick, a three-hour children’s programming block.

That was one of the first examples of a major broadcaster moving a critical operation to a fully virtualized public environment, according to Imagine Communications, Sinclair’s partner in the project.

“It really is a vehicle for us to get experience in running operations out of the cloud,” Parks told TVNewsCheck. “That’s the only way you know if the airplane is going to fly. You’ve engineered it, you’ve modeled it on the computer, you’ve done all that stuff — but at some point, you’ve got to start the engines and take off.”

Virtualization: Looking But Not Leaping?

Everyone from smaller station groups to major playout centers are examining software- and cloud-based solutions as they look at consolidation, centralization and density of operations, according to Brick Eksten, Imagine’s chief product officer.

“The general move is just increasing demand to find ways to drive efficiency in the playout center,” Eksten says. “That’s the No. 1 undercurrent.”

“Many customers are looking for at least a virtualized, if not a hosted platform,” says Sam Peterson, Bitcentral’s VP of product management. “There are many RFPs and RFIs and RFQs out there right now that are really all about moving to this hosted model. That doesn’t necessarily work for everyone, but we certainly see that as a trend.” (The hosted model is storing applications or data on a server or other computer so it can be accessed over the internet.)

That trend is partially due to advances that allow more and more video processing to be done in just a software stack on top of an operating system. “The move is toward a more software-defined and software-realized technology set, whereas even three or four years ago, there was still a reliance on some hardware component,” Peterson says.

Another major contributing factor is the recent release of the SMPTE ST 2110 suite of standards for handling of professional media over managed IP networks. “That’s not necessarily taking up immediately, but certainly we are looking at SMPTE 2110 to get us to a world where we can replace — or at least virtually replace — SDI in an infrastructure, specifically for master control,” Bitcentral’s Peterson says.

But whether IP and virtualization can replace all SDI functionality today remains a “big question mark” for many broadcasters, says Tom Gittens, chief commercial officer of Pebble Beach Systems.

“It’s not a question of, ‘is IP and virtualization and cloud coming?’— it is,” Gittens says. “The question is, ‘at what pace?’ And that pace rather depends on broadcasters’ view of the risks associated with that changing technology.”

Efficiency has been a key driver of interest in virtual data centers on-premise or in the cloud as broadcasters continue to consolidate operations and move away from the traditional “heavy iron” that has been tied to on-premise systems, says Jill Walters, VP of sales for Crispin.

“As a result, Crispin has already heard from broadcasters looking to leverage these developments as they seek smaller, self-contained master control and playout solutions for applications like disaster recovery and short-term, pop-up channels,” Walters says.

Disaster recovery came to the forefront over the past year, particularly last August when the unprecedented flooding in Texas due to Hurricane Harvey knocked some stations off air, according to John Studdert, Sony VP of sales and marketing.

“Some broadcast groups approached us and said: ‘We really need to fix this problem.’ So we put the priority around creating master control on the cloud for disaster recovery, because that seemed to be the first step that they want to take toward virtualizing master control.”

“If they lose the ability to operate at the ground level, they need to be able to switch over to the master control on the cloud without their viewers realizing the interruption took place,” Studdert adds. “That may sound simple enough, but there’s a lot underneath that hood.”

According to Del Parks, the recent standards release was a key factor that led Sinclair to launch its recent KidsClick proof-of-concept: “Looking at ATSC 3.0, where I think most of the playout will happen … is in the cloud,” he says.

As 3.0 facilitates delivery of TV over IP, virtualized and cloud-based solutions will help broadcasters reduce reliance on costly satellite, fiber or microwave transmission solutions, according to Chris Pulis, VP of distribution operations and content security at Deluxe Entertainment Services Group.

“These legacy technologies are limiting as broadcasters begin delivering more UHD and HDR content,” Pulis says. “Cloud-based IP transmission solutions are ready to deliver those advanced formats today and help put OTA broadcasters on a more equal footing with the subscription OTT platforms they now have to compete with.”

The need to deliver OTT is driving further interest in virtualized and cloud solutions, according to Andy Warman, Harmonic’s director of playout solutions.

“We now manage and deliver high volumes of OTT services from public cloud infrastructure,” Warman says. “This movement for OTT will only accelerate from here onwards, and the addition of playout capabilities into the mix will enable more and richer OTT experiences for the consumer.”

Look Before You Leap

Some TV networks no longer see the cloud as something they should do, but something they “must do,” says Martin Whitaker, manager of file-based products at Evertz.

Since launching, Discovery has done multiple live events from the public cloud, according to Whitaker.

Despite the promise, however, cloud-based playout solutions may not be a panacea for every broadcast application. “This is one of those situations where just because something’s possible, doesn’t necessarily mean it’s the right thing to do,” says Ian Fletcher, CTO of Grass Valley’s media business unit.

Moving email or accounts to the cloud avoids capital expenditures and costly software upgrades, so doing the same for transmission might seem like a no-brainer next step. However, that’s not necessarily the case.

Instead of cloud computing, broadcasters should start thinking about “fog computing,” Fletcher says.

Fog computing is shorthand for decentralized computing infrastructures where data, applications, or compute power might reside in the cloud, but might also reside on the edge of the local network, if for example that helps reduce latency or decrease the amount of data sent back and forth to the cloud.

“It’s basically the cloud coming down to the ground,” Fletcher explains. You’re blurring the line between processing at the edge, and processing in the cloud.”

Working out issues like that means that many broadcasters are on the incremental upgrade path for now, and likely some time to come.

“Broadcasters don’t want a ‘big bang’ solution that has all the possibilities of going ‘bang,’” says Mike O’Connell, EVP of Pixel Power. “Our customers see that SMPTE ST 2110 is where it’s at, but they want an evolutionary path that enables them to get there while taking advantage of the savings, efficiencies and new revenue opportunities along the way.”

Be careful about what you want to be… Find your niche and excel at it.

Why not put Master Control on people’s TV sets? Oh wait they already have that. Its called the Internet.